4 things BuzzFeed has learned about content – identity, social and why EQ matters more than IQ

4 things BuzzFeed has learned about content – identity, social and why EQ matters more than IQ

The internet’s addiction to cat memes and fail GIFs has let BuzzFeed’s founders think differently about monetisation and become a new breed of publisher, turning away from display advertising completely and pioneering ‘native advertising’.

Marketing sat down with BuzzFeed’s global revenue officer, Andy Wiedlin, following his talk at a seminar on native advertising held by the IAB last Friday, the same day BuzzFeed Australia launched (read the interview with him here). His comments on why interruption is dead, tips for creating shareable content and sassy digs at display advertising show the advantage new players have in looking at old problems through a fresh lens.

BuzzFeed is an entertainment site, Wiedlin said in his keynote, it creates content that people want to share. “We’re growing really fast. When I joined two and a half years ago we reached six million unique visitors around the world, and this month we’re probably going to reach 150 million.”

Wiedlin defines native advertising as paid ads that are so cohesive with the content, assimilated into the design and consistent with the platform’s behaviour that the viewer simply feels they belong. “We stole this from Google and Facebook and Twitter – ‘real companies’. It’s advertising that’s not interruptive. It’s in the flow. It’s advertising that sucks less.

“If native is good, we think social is better. Our general point of view is this: the internet is fucking awesome. You can buy things and engage with them, and you can share them with your friends. So why doesn’t advertising do the same thing? Wouldn’t it be cool if brands could create things that people like and share on your behalf, and you can do word-of-mouth marketing at scale?” Wiedlin believes this to be the promise of social advertising, and that’s what BuzzFeed is focused on.

But that’s a lot of power for brands, he says. “In the United States you can tell people, ‘Oh, you can create advertising that people will share’, and they get a client like Dell Computing and go, ‘That’s so awesome, I had this 30-page white paper on enterprise computing that I need to go viral right now!’” BuzzFeed tells its advertisers to take ‘the Facebook test’. Would you want to see this content in your newsfeed? Would you click on it?  Would you share it with your friend?

BuzzFeed started seven years ago, and Wiedlin says it really started as an R&D lab to figure out how and why people share content. These are some of the things it learned.

1. Content is all about identity. “For most media you create things to appeal to the biggest audience. But for social content you want to create it to a niche audience that totally believes in it so much that they’ll share it. So we do articles such as ‘12 reasons why it sucks to be left-handed’ or ‘37 reasons why it sucks to be tall’. There’s this guy that works for me in Chicago and he’s six foot six, and he’s calling me up and he’s like, ‘Oh my God, that content was so amazing. All my ginormous friends are sharing it’. It’s just a funny thing how people share content.

“One of the reasons why we’re starting BuzzFeed Australia – organically we probably got two million people visiting our site – is so we can create content that’s like, ‘Twelve reasons why you know you’re from the Western Suburbs’. If you make stuff about a specific identity and content we think it will be shared more.”

2. Have a heart. “We can report ad nauseam about flooding in Bangladesh, and people feel bad about it, but if you show a guy saving kittens people are more likely to identify it and share it because it touches them emotionally.”

3. Capture the moment. “About a year ago there was a 4.0 earthquake in New York, it was nothing. But on Facebook New Yorkers were screaming ‘earthquake’ and running around and out of buildings. So we published this story about an hour after the earthquake: ‘27 horrific images’ with pictures of objects slightly askew (example pictured below). People in California were heckling New Yorkers and vice versa, and we got a million views with this content in less than 24 hours because we captured the moment. 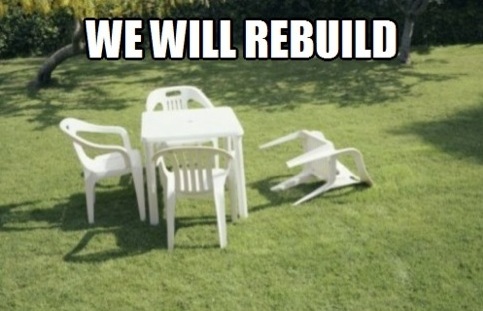 4. People share humour. “People share stuff that’s funny, we all know that. But, human rights are social, too. In the United States we have this whole marriage equality push, and instead of saying, ‘I’m for marriage equality’, which can be hard for people to do, you give them GIFs about awesome couples that have been together for years and now they have the right to get married. Whether you’re gay or not, and you support that, you’re going to share that, because it says something about yourself and you’re building your own brand.

“If all content is social now, then why can’t ads be, too? We found social advertising is more like TV advertising, and less like display advertising because you’ve got a big palette and you can tell a story, and you can involve people emotionally and you can have a heart. Think of it as a gift to tell a brand story that’s relevant, not one to spam people with banner ads.”