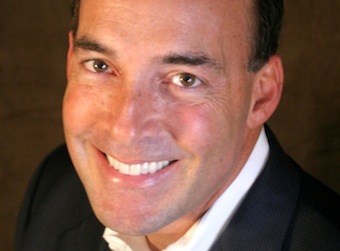 Building a business “on the back of time wasters” by selling “advertising that sucks less” is how BuzzFeed’s global revenue officer, Andy Wiedlin, describes the social content maverick’s proposition. The internet’s addiction to cat memes and fail GIFs has let BuzzFeed’s founders think differently about monetisation and become a new breed of publisher, turning away from display advertising completely and pioneering ‘native advertising’.

Marketing sat down with Wiedlin following his talk at a seminar on native advertising (read about BuzzFeed’s key learnings from his presentation here) held by the IAB last Friday, the same day BuzzFeed Australia launched. His comments on why interruption is dead, tips for creating shareable content and sassy digs at display advertising show the advantage new players have in looking at old problems through a fresh lens.

Andy Wieldin: We got a bit lucky because we’re a new company. Previous to this I was at the Huffington Post, and the Huffington Post is very similar in BuzzFeed in the sense that it’s interesting, and we have journalists reporting on things and we want people to comment and share it. But, when Huffington Post started there was no native advertising and the only way we could monetise was through banners. When BuzzFeed started we drew a line in the sand and said, “Okay, banners stink, it doesn’t work for our site, it doesn’t work for our users, we’ve got to come up with something better”. Once you get addicted to banner revenue, even if it’s going down, you’re like, ‘Oh my God, I need it’.

A lot of brands are asking themselves “is native advertising something I should be doing?” Is it actually working?

Yeah. The big players are doing native advertising and nobody talks about it. Google is native advertising to me, [as is] Facebook, Twitter, and they’re fantastically successful. To me that’s a great model to follow. The question that we got from the audience [at the seminar] today about, ‘Does it scale? Should I do it?’ I think you have to. I mean people hate banners, their performance is going down, consumers are completely and totally in charge, the idea of interrupting them with a 30-second spot before they get to their content, or some sort of interstitial, I think those days are gone. I think that you have to respect them and create great advertising that’s in the stream if you’re to have any chance of getting any sort of success.

So you would say that it is working?

I would say that it’s still early days but I think that it’s very promising, and the biggest players are doing it. Why wouldn’t you try it?

So what metrics are you using to measure its effectiveness?

Some of the standard metrics where we measure, obviously, impressions, and click-through rate, and then we measure what people do when they get to the content. Do they read to the bottom, do they watch a video, do they like people on Facebook, do they like people on Twitter? But, the big thing that we measure is, after they consume the content, do they share it or not, and then we measure all the people that came to the content for free through sharing. That’s our big benchmark – is the content good enough to be shared? On average our brands are getting 30% free engagement through sharing. That’s pretty good, I think. Banners get zero.

Is there a limit to the amount of sponsored native ad posts you can run?

We’ve got gobs of content and a sprinkling of social ads. On our homepage we may have three ads, and yet there’s probably 100 pieces of content, so I think we’re being respectful to users. It’s not like every single story is a paid ad. People would rebel at that, and fortunately traffic is growing so it’s not an issue. We don’t have to monetise every single spot on the site.

But it’s interesting – by definition, a native ad should have the same value to the reader as an editorial piece. Do they always?

Yes. Sometimes. I mean native advertising can be fantastic and we’ve seen instances where people click on it and share it more than an editorial piece of content. The thing is that if you’re an editor you’re not encumbered by anything [with standard editorial]. You see something happening on Twitter, you’ve got a great idea, you just go with it. If you’re a brand it has to be on-brand, it can’t be totally whacky. Brands have legal departments and things like that, so just out of the gates sometimes native branded content is hindered as opposed to editorial.

So there are hindrances, but sometimes it does better and sometimes it does worse. In theory its ability to generate traffic is no different – it’s delivered in-stream so the experience is the same, but it’s flagged as being a sponsored post. Does that flag enter the consumer psyche?

We’ve done some research – about 12 brand studies with Neilsen – and we found people realise that it’s advertising; we’re not tricking them. We also found that people don’t really care. If it’s interesting to them they’ll read it.

So they don’t care unless it’s bad.

Yeah, if it’s bad then, [via] the comments, you’ll know pretty quickly. Then the question is, if they know it’s an ad when they click on it and if they engage with it, does it move brand metrics like trial and preference? The answer is yeah, sort of. But if someone shares it and you get it shared with you and you look at it, you’re much more open to the brand than you would be to regular advertising. It’s like, ‘Oh, my friend shared this Virgin Mobile post with me. That friend kind of likes Virgin Mobile, now I like Virgin Mobile a little more’. So this idea of word-of-mouth marketing, at least the studies that we’ve done to date, sort of shows that people know it’s advertising and the brand metrics are going up.

Do you think you have a natural advantage with native advertising due to the nature of BuzzFeed content, and if so, where does that leave some of the more serious titles? Is it a harder task for them?

I think it’s easier for us because we’re sort of this youth brand that’s doing interesting things, and we have a text stack that can tell advertisers what’s working and what’s not. I think if you create branded content in a traditional environment it’s kind of hard to measure the sharing and maybe harder to tell if it’s even working. We’re a publisher and all we care about is getting our stuff shared, and that’s a completely different mindset than a regular publisher that publishes stuff that people read, and it’s a higher bar, we think, to get it shared.

A lot of the stuff that you do piggy-backs on trending topics. Is there a balance that you have to strike between that and starting the conversation yourself and how do you advise brands on which way to go there?

We’re doing a lot more trending stuff because brands are really trying to do always-on marketing. But most brands take a while to get going, so the content’s really more evergreen. So we take the time to think about what the brand stands for, it doesn’t have to tie around Valentine’s Day or Saint Patrick’s Day or whatever it is, it’s just creating emotional content that people will share any time of the year.

So more brands are looking at always-on marketing?  Are they coming to you saying that they want to do that?

Yeah. There’s a lot. If ‘native’ was the buzzword last year, ‘always-on’ is the buzzword for this year. People want to know what’s involved, they want to do it, and some of the great brands are stepping up and doing it, but it’s a bit harder than they might think. They have to commit staff and they have to commit to a longer term deal with like a partner like us.

Talking about delivery format, you look for formats that are more shareable, such as lists or quizzes. What about other format types such as data stories or video? How important are innovative or new delivery formats to shareability?

We’re exploring that right now. Some people ask, ‘Why are you always doing lists?’ Well, we did lists because lists work. We spent a lot of time trying to get quizzes right. The ‘What city should you actually live in?’ quiz got 18 million views. We’re investing in video. So in the past everybody says, ‘Oh, I want a viral video’, but videos didn’t go viral because nobody’s watching videos on cell phones. Now, with higher bandwidth and shorter form content that is awesome, we think that video has a chance to be shared, and so we have a production studio in LA led by this video genius named Ze Frank, and we’re creating both edited and branded video.

So you see video as a big part of your future?

Absolutely. Advertisers and consumers love video. Sight, sound and motion is awesome, but I think it’s a real mistake to create 22 minutes of video content like it’s a TV show, or even 30 seconds for a commercial. You should tell a story with as much brevity and impact as possible, and generally that’s like a less than two minute kind of thing. One thing that Ze says that’s really interesting is usually when you tell a story there’s a beginning, a middle and an end, but with internet video it’s like there’s an end, an end and there’s end. It’s all high impact, constant shock, delight and surprise people.