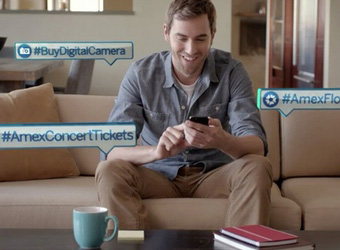 American Express has partnered with Twitter to launch a tweet-to-buy system allowing users to buy products with two short tweets.

The credit card company announced on Monday that it will allow its members to make purchases on Twitter using only hashtags, in a system similar to local start-up BuyReply, which launched last August.

Dubbed ‘Amex Sync’, the service requires cardholders to sync their card with Twitter and tweet hashtags such as #BuyDigitalCamera to @AmexSync in order to express their interest in buying. Amex will then tweet back a confirmation code for the users to reply with in order to complete the transaction.

Among the first products to be offered will be discounted Amazon Kindle Fire HDs and Xbox 360s. It is unclear how the product sales will be promoted other than via tweets from the various companies involved, and the system will only roll out in the US at this stage.

Short code tweet-to-buy systems allow consumers to buy products directly from offline media, similar to QR codes and a number of scan-to-buy systems launched by publishers, but without the need for consumers to download an app. By removing the need to scan to buy, calls to action could also be placed in broadcast media.

For Amex, the move is about helping merchants track ROI on social media while encouraging consumers to help promote brands while they’re purchasing them.

“Our merchants want the ability to better track conversations – and to see whether these conversations on Twitter are resulting in better business,” says David Wolf, VP of global product and business development at Amex.

“You can turn a hashtag into more than just a conversation – you can turn it into a trigger that actually can spark commerce,” adds Joel Lunenfeld, VP of global brand strategy at Twitter.

Amex’s Sync program has offered discounts on products for people who tweeted hashtags or shared information on Twitter, Foursquare, Facebook and Xbox Live since launching in March last year.

Local player BuyReply launched text-to-buy in February, taking the short code concept beyond Twitter and email into the most basic of native apps. The system allows consumers to respond to calls to action from TV, radio, magazines or catalogues by SMS’ing a short code to a designated number which will reply with a link to a checkout.