Australia’s biggest brands are failing to capitalise on the content marketing power of YouTube, with most using their channel as a haphazard collection of videos rather than a platform to tell a coherent story.

Despite commanding an audience of over 9 million Australians, and consistently ranking in the top five trafficked websites, the majority of Australia’s biggest brands are using their YouTube channel as a video library, leaving viewers with a disjointed narrative, according to research conducted by Encoder PR.

The study, which analysed the YouTube channels of Australia’s top 92 non-government advertisers, found that of these 41 owned a branded channel, of which only 30 were active.

In most cases, the channel appeared to serve as a back end to a website or Facebook page, housing a collection of company information, customer support and tips, commercials and campaign content, rather than content specifically made for YouTube. Only 22 of the brands organised content or displayed signs of having a strategy in place. Nine of these were more advanced, including Coles and Telstra’s channels, using gadgets to organise videos, customised page designs and themes.

General manager of Encoder PR, Daniel Young, says despite the audience being there, brand are yet to prioritise YouTube, possibly due to the shadow of Facebook and Twitter which are seen as being more user friendly and measurable for marketers.

“Internet users love online video but very few brands are using this channel to tell a coherent and entertaining brand story, share useful information or provide a service,” Young says. “Most marketers focus on Facebook for social media, because they can see the numbers, it provides lots of tools for targeting and customisation, and it’s measurable. 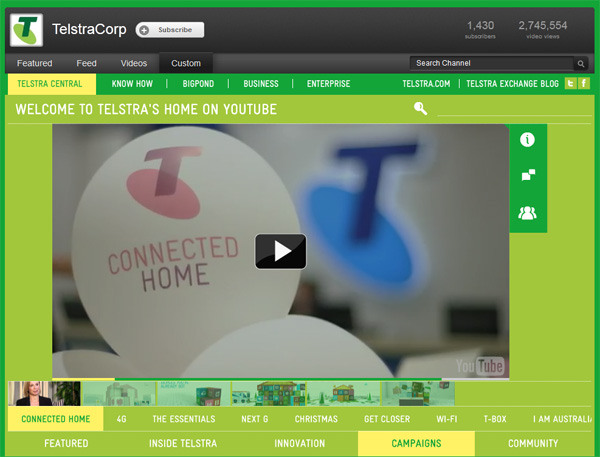 YouTube was the fourth most trafficked website in Australia in March, according to Nielsen’s Online Ratings, with users visiting on average nine times per month and spending around seven minutes per session.

But it could be doing more to make the service better for brands. “Brands haven’t got or aren’t using the tools in the way that creates a regular audience,” Young says. “There aren’t really any clear calls to action about how to make it more user friendly and personalised to the user’s interests, like Facebook has done with the ‘like’ button… the subscribe feature isn’t emphasised at all.”

While many brands have been slow to take it up, Encoder’s study did reveal greater use of YouTube by marketers over the past two years, with a six-fold increase in the total number of video views, up from 4.37 million in 2010 to 30.44 million this year. The brands analysed, which were selected based on Nielsen’s list of top advertisers, averaged 742,000 views on their channel.

A total of 17,600 have subscribed to the 41 channels analysed, a figure low in comparison with the brands’ Facebook Pages, which for the ten most viewed brands totals 674,000.

According to separate research from social video platform Unruly, exposure to branded video content has a positive impact on brand engagement, creating a 23% uplift in brand favourability among Australians. With more videos being watched than ever before, it’s time for brands to take up the opportunity, Young says.

“Brands need to start thinking about their YouTube channel as exactly that [a destination in its own right], and employing some of the techniques that actual broadcasters use to build and maintain an audience, such as content cross promotion, teasers and trailers, and of course quality content.”

Young points to successful community video bloggers, Natalie Tran and Nate ‘Blunty’ Burr, who insert calls to action, whether it be subscribing to the channel or cross promotion of other videos, so that fans keep in touch with their content.

Tags:
Previous Article
Your marketing quote and niche ad option of the day – 17 May 2012
Next Article
Facebook IPO priced at $38 a share