The Victorian Taxi Association (VTA)’s push to engage the public on social media via #yourtaxis backfired yesterday when Twitter erupted with a stream of nasty and sarcastic tweets using its hashtag.

The VTA sent out a call on Twitter yesterday via @yourtaxis asking the public to ‘tell your taxi story’. Melbournians obliged, and by late afternoon, #YourTaxis was the second-highest trending hashtag on Twitter, for all the wrong reasons.

Tweeters from all over the world told stories of abusive, rude and unprofessional taxi drivers:

A taxi driver threatened me after a bill dispute by circling the block around my house 3 times. #YourTaxis

#YourTaxis That time I had to punch my way out of a cab because the driver was trying to sexually assault me. — Amy Gray (@_AmyGray_) November 9, 2015

.@yourtaxis Many times a taxi slowed down as I hailed it, asked where I wanted to go, then sped off because the fare was too low #YourTaxis

@yourtaxis It smelled like a wookiee’s armpit. I was preached at about how Somali immigrants are destroying Australia for 25 min. #YourTaxis — Leigh Stillard (@LeighStillard) November 9, 2015

Using the 13CABS app and having six drivers in a row claim ‘the passenger has been collected’ while I waited in the cold. #YourTaxis

Another cab driver asked if my housemate was home and if he could come in and do us both. I was young and terrifed #YourTaxis #TaxiYourWay — ATravellingCook (@ATravellingCook) November 9, 2015

Many tweeters questioned the VTA’s decision to invite comments.

Perhaps the taxi industry should have known it was so disliked and should have foresaw the backlash from Twitter, which can be a Wild West of negativity. But the VTA is maintaining its optimistic position, responding to every tweet and thanking people for sharing their feedback.

Woah, what a day! We’ve started the conversation, heard from more than 4,000 people and we’re still here listening pic.twitter.com/wClrOIYHIa 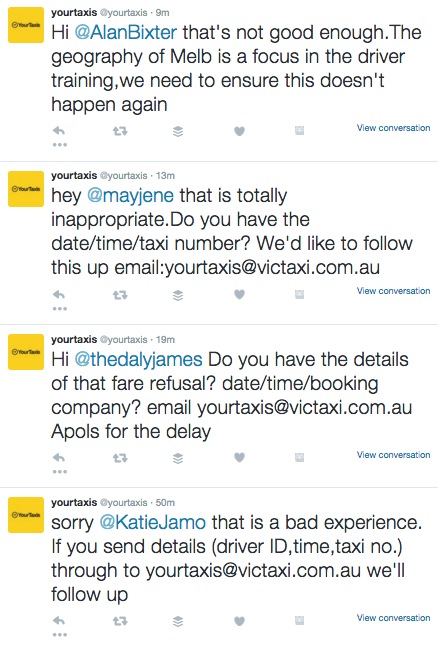 The ABC reported that the VTA denied the campaign was a “social media fail of epic proportions”. “The response online over the past 24 hours isn’t anything we didn’t expect,” VTA chief executive David Samuel said in a statement.

“We asked for feedback and we got it. The good and the bad and everything in between.

“It also demonstrates the number of people that rely on taxi services and we want to make sure our service continues to meet customers’ expectations in a period of rapid change.”

The VTA social media team worked tirelessly through the afternoon and evening to respond personally to nearly every complaint. Just as all over the world, Victorians are turning to global ride-sharing service Uber, and loving the improved service compared to traditional cabs – a form of transport it seems many only tolerated while it was the only option. Uber has refrained from joining in the #YourTaxis conversation.

#yourtaxis Driver arrived on time, in a clean car, and even chose a way home that avoided traffic…wait, sorry that was actually @Uber — Marc Slater (@MarcWSlater) November 10, 2015

“When the Victorian Taxi Association began to look at spending money on marketing it started with the lipstick and forgot about the gorilla,” Professor Mark Ritson wrote on Fairfax’s Business Day.

“The Taxi Association should have started with fixing the ailing industry and then measuring the perceptions of Victorians to ensure that positive attitudes to taxis prevailed. Until then, any investment in promoting taxis in and around Victoria is throwing petrol onto the fire of dissatisfaction already burning in and around Melbourne.”

“Government and the industry need to be thinking about that and then looking at how they make things right in the taxi industry, rather than trying to make it difficult for consumers to keep loving Uber.”

Samuel pointed out that Victorian taxis’ customer satisfaction rating had climbed to 75% from just above 50% four years ago.

“People didn’t feel they have had an avenue where they could complain. This is about starting that direct dialogue with the community about those issues we know are a problem,” he said, in defence of the choice to use social media.

“We know short fare refusal is a problem, we know drivers talking on mobile phones annoys people. We want to rule that out and stamp that out. One of the ways we can do that is by bringing it into the public sphere.”

The campaign was originally set up to build trust and engagement with the public amid serious disruption from global ride-sharing tech company, Uber.

“Coordinated by the Victorian Taxi Association, YourTaxis is the industry’s official website delivered on behalf of every driver, operator, and license holder across the state,” the site’s ‘About’ page reads.

“Use YourTaxis to book a cab, calculate a fare, and get all the facts about the essential services taxis have been providing Victoria for 150-years.”

The ‘share your taxi story’ element offers the chance to win free taxi rides for an entire year.

For those who want some inspiration, currently sitting on the site in a photo-board layout is a range of positive taxi stories from both passengers and drivers.

Here are some passenger examples, which, in stark contrast to the stories on Twitter, tend to be only very positive:

“My Nan is in her mid 90s and taxi travel keeps her independent, active, healthy and socially included.

Taxi-travel allowed her to attend her great granddaughters 3rd birthday.

“I took a trip back home from the airport at 12am with a very kind driver. As it was late and I was exhausted, I left my iPhone in the taxi and only realised when the driver had driven off. Thinking my phone was gone as I had no idea of the driver’s license number – I was pretty distraught. The next morning I woke up to a knock on the front door and sure enough, there was my driver and he had brought me back my phone. Thank you!”

“I spent five years working in breakfast television at the ABC. I had the same three brothers pick me up at 4:25am every morning. Twenty minute trip, with lots of good stories and memories. I can’t thank them enough for their reliability and service. They became great friends and I would never use any other service.”

The stories from drivers are slightly less rosy:

“I once drove a very drunk man from Melbourne to Geelong. When he got into the cab I asked him to pre pay the fare, which he agreed to do. We eventually got to Geelong and he asked me to pull over to let him out. I pulled over but before I had even stopped, he open the door and starting sprinting away from the car. To bad this runner had pre paid, although at the time he obviously couldn’t remember.”

“I once took a lady to Geelong. When we got there she went to pay but her card declined. She said she was very sorry and she would fix the fare up tomorrow and left me her driver’s licence. I agreed to this and told her have a nice night. It’s been two months and I still have her drivers licence and she hasn’t paid.”

“When I first started driving, I refused a fare from a girl on the side of the road. I thought to myself, I would only take the good jobs, so I refused to take her because it was such a short trip. I felt so bad I turned the car around and went back and picked her up and gave her a $10 discount for the $22 fare.”