LG Electronics Australia’s #G4Recommender campaign was a social media influencer program designed to take a fresh approach to creating awareness of LG’s latest smartphone release. The program sought to take a new approach in a cluttered media space for an audience that is becoming increasingly hard to reach through traditional means.

LG faced a number of challenges when approaching the launch of the 2015 flagship device, the LG G4. In Australia the smartphone market is dominated by a few large players that have extensive media budgets and therefore the smaller players need to look to creative ideas to gain cut-through. The Australian mobile phone market requires challenger brands to take new approaches to opening up discussions with consumers and educating prospective new customers on the relative benefits of their products. 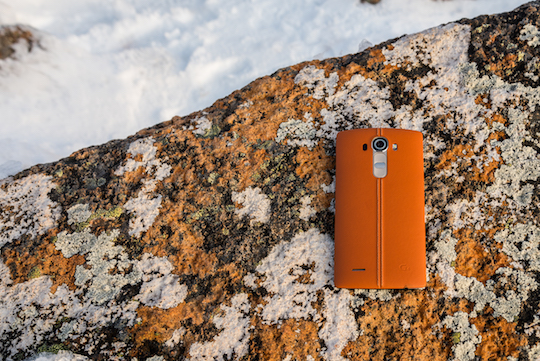 LG decided to run a six-week influencer activity to be called the ‘G4 Recommender’ program. Over 30 social media influencers with significant existing follower bases were recruited and provided with an LG G4 handset. They became the ‘G4Recommenders’ for the duration of the campaign.

Each ‘G4 Recommender’ was chosen according to set criteria. They had to have an engaging and exciting Instagram page and have a large existing follower base. LG targeted influencers from all around Australia and influencers with varied interests: a mix of foodies, fashionistas, photographers and an even split between males and females.

Each week a new challenge was set and each challenge showcased a particular feature of the handset or usage scenario. The six challenges were as follows:

Recommenders received an LG G4 handset for the purposes of completing the program of six weekly challenges. Each week the influencers were also eligible to win one of five prizes based on engagement levels of posts and individual creativity. 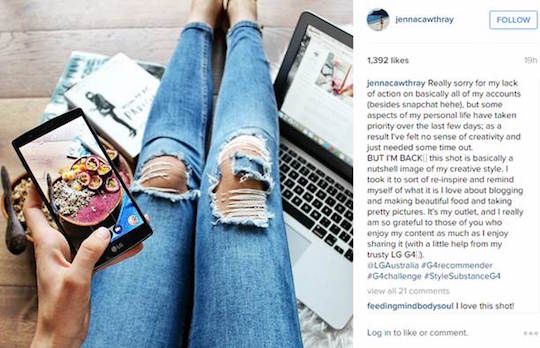 In order to effectively run this campaign LG engaged with Hypetap, an end-to-end collaboration platform that connects an invitation-only network of agencies, brands and influencers. Hypetap was used to source, connect and collaborate with the social media influencers.Social media influencers on this platform go through a thorough screening before being introduced to brands. The platform was instrumental in allowing LG to focus on developing the creative aspects of the campaign. Hypetap offers a host of great influencers, makes it easy to communicate with all of them regularly and also, most impressively, has an incredible reporting tool.

The Hypetap reporting mechanism was one of the most valuable aspects of the platform. It was fundamental to the success of the G4 Recommender program to keep an eye on influencer activity and audience engagement. Hypetap offered both a holistic view of the campaign results, as well as making it very easy to dive in and look at individual Recommenders.

Through this platform LG first issued the welcome notes and hints and tips to moving from iOS to Android to all the Recommenders. It was then the platform for all the weekly engagements, including setting the weekly challenges and announcing the weekly winners.

LG Australia also regularly interacted with the Recommenders through social media on as many of the correctly tagged posts as possible. Often, LG – with the permission of the influencers – would repurpose the posted images for its own social media channels, making sure to tag the relevant recommender. 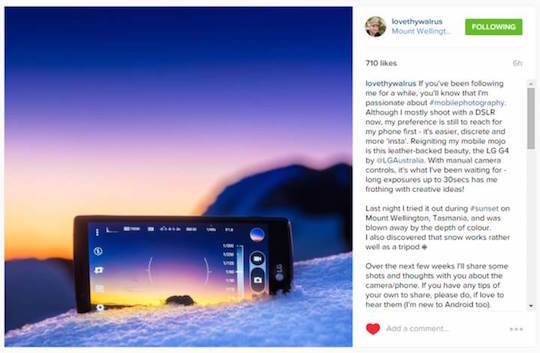 The G4 Recommender program by numbers:

A comparative measure of estimated PR value as assessed against mainstream media was $1.5 million. The most important result for this campaign, however, was the G4 Recommender sentiment. It was important to understand if the six-week program had a positive effect on those taking part and their perception of the brand and product.

Here are some examples of the closing comments from the social media influencers regarding the G4 product and overall campaign.

@mr.gumbatron: Congratulations on running such a successful campaign, I think it’s wonderfully creative how you chose to advertise the LG G4 and use social media as a vehicle for that […] by running challenges every week to ensure great content and engagement with those involved.”

@anjomiranda: “A big thanks to @LGAustralia! It’s an honour to be selected as an official #G4recommender […] Still blown away with the camera on
the G4! Haven’t gotten as sharp and clear lowlight photos before until the G4 so to anyone looking for a great phone for Instagramming, the #LGG4 is the way to go!”

@lovethywalrus: “I’ve been road testing this curvy little leather-backed beauty for the past few weeks, and am delighted to say that I’ve been impressed by its camera and style. The #LGG4 by @lgaustralia has brought #mobilephotography to a whole new level. Having control of ISO, shutter speed, white balance and focus – independent of each other – has been a game changer.” 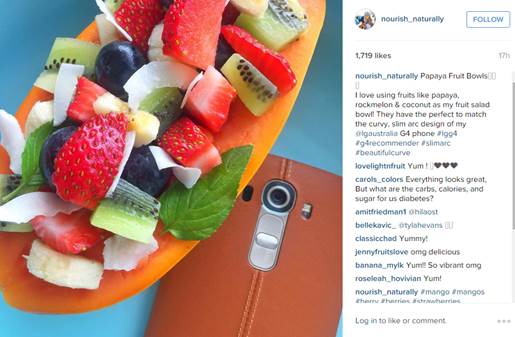