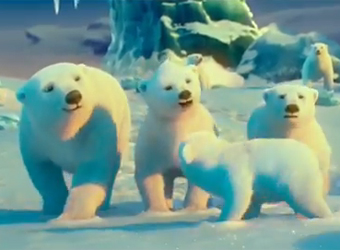 Coca-Cola has teamed up with legendary film producer Ridley Scott to release a short film featuring the brand’s iconic polar bears, furthering its pursuit of a ‘content excellence’ strategy.

The seven-and-a-half minute animated film, which appeared on the brand’s YouTube channel on New Year’s Eve, was made by the studio behind big-screen blockbuster Happy Feet – Australian animation house, Animal Logic.

The short film traces the journey polar bears make across the arctic, mixing the majesty of the creatures with humorous characters of young, goofy polar bears. It’s a coming of age story, where the polar bears express their own identity through dance, similar to the penguins in Happy Feet.

Branding is absent throughout the film, with the only references to the brand in a ‘Coca-Cola Presents’ page at the beginning and a web address (coca-cola.com/polarbears) at the end, which redirects straight through to the company’s global Facebook page.

The hashhtag #polarbears also appears before the closing credits and it is understood that elements of the film will be broken out into 15-second teasers for the film.

Coca-Cola has been public about its ‘Content 2020′ strategy to “move from creative excellence to content excellence” – a strategy which will see the brand rely less on traditional ad agencies for creative ideas, in favour of a collaborative approach to storytelling and content creation.