Accommodation and pharmaceutical brands were the buzz categories on Facebook over the month of March, gaining the most new fans and highest engagement rates according the ‘Australian Facebook Performance Report’.

Findings from the study, released by social media agency Online Circle, show that while all industries grew their volume of fans (‘likes’) between February and March, the highest relative fan growth was experienced by some of the less followed industries with ‘Travel – Accommodation’ growing by 20.9% and ‘Pharmaceutical’ up by 14.5%.

The two fastest growing industries also experienced the highest engagement rate – accommodation brands scored an engagement rate (a simple equation of number ‘talking about this’* page divided by number of fans) of 6.1% and pharmaceutical fan pages commanded a rate of 5.2%.

The report, which averages five point-in-time snapshots of fan and interaction numbers in February and March to generate like and engagement figures, also shows strong increases in fan numbers among automotive brands, up by 13.0% and the most followed industry, ‘FMCG – Snackfoods’, up by 11.9%.

‘Retail – Grocery & Alcohol’ and ‘Automotive’ also had standout engagement rates of 4.4% and 4.1% respectively with strong promotional and marketing activity support driving the performance. The report claims the findings highlight Facebook users “willingness to engage in mutually beneficial support of specific brands that relate to their lifestyle and how they view themselves.”

Based on number of fans, retail-orientated industries make up five of the top six positions, with ‘FMCG – Snackfoods’ holding on to the top spot, adding over 300,000 new fans collectively during March. The rankings for March 2012 were steady against January 2012’s figures with no change in position amongst the five leading industries. 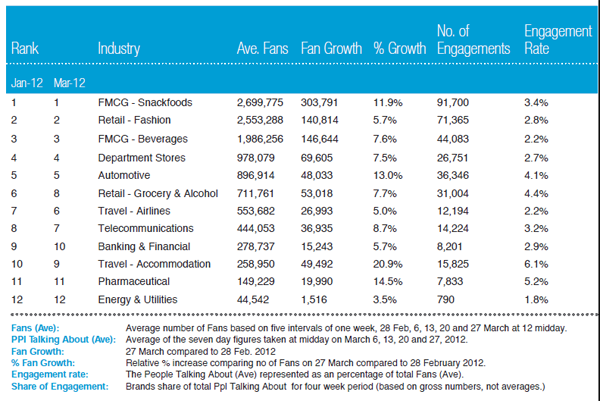 The top performers in each category were:

Most liked: Qantas – 143,232 fans
Most talked about: Qantas – 3496 people talking about page
Most engaged audience: Airlines of Tasmani – 6.9% engagement rate

The report, which is released bimonthly (every two months), doesn’t analyse the sentiment of interactions with the brands and only a list of brands designed to be “representative of those brands leading the way in each vertical”

*‘People talking about this’ is defined by Facebook as the number of unique people who have created a story about a page in the past week, by liking the page or one of its posts, posting on its wall, answering a question, responding to an event, mentioning the page, tagging the page in a photo or checkin, or recommending the page or place.

Tags:
Previous Article
Not-for-profit wants one million 5 cent coins
Next Article
Are you caught in a virtuous circle or a vicious cycle?