In its S-1 document filed with the Securities and Exchange Commission, the 8-year-old social network revealed that it now had 845 million active monthly users and revealed its revenue and profit numbers for the first time.

The documents highlight the social networks dependence on advertising, which accounted for 85% of the $3.71 billion in revenue it earned in 2011.

The figure of 845 million monthly active users as of the end of last year is a 39% increase from a year ago. Of these, 483 million are active on a daily basis, contributing to a total of 2.7 million likes and comments and 250 million photos uploaded every day.

Facebook also concedes that the shift towards accessing its service by mobile represents a challenge to the business. Each month a total of 425 million users access Facebook via a mobile device, a figure which is growing faster than growth in overall visitors, but the social network is as yet unable to serve ads via mobile.

In a letter to investors, Mark Zuckerberg, writes, “Facebook was not originally created to be a company. It was built to accomplish a social mission – to make the world more open and connected.”

Zuckerberg goes on to outline their approach and how it is driven by this mission: “We think it’s important that everyone who invests in Facebook understands what this mission means to us, how we make decisions and why we do the things we do.

“Today, our society has reached another tipping point. We live at a moment when the majority of people in the world have access to the internet or mobile phones – the raw tools necessary to start sharing what they’re thinking, feeling and doing with whomever they want. Facebook aspires to build the services that give people the power to share and help them once again transform many of our core institutions and industries.”

Zuckerberg goes on to say that part of the business’s goal is to help create a stronger economy with more authentic businesses that build better products and services.

According to the Wall Street Journal, one of Facebook’s main weaknesses is a lack of long-term commitment to the site from most of its advertisers, meaning the company could suffer if advertisers shift to other venues.

As for revenue streams beyond advertising, Facebook attributed 12% of its income – $470 million – to Zynga, which came from the purchase of virtual goods within games such as Farmville, and direct advertising from the gaming company.

Facebook’s update from public to private, was somewhat forced after it reached its trading limit in secondary markets, which is restricted to a 500-shareholder rule for private companies with more than $10 million in assets.

Upon passing that mark last year, the company was faced with a deadline to file detailed financials of April 30, 2012.

Facebook will trade on the market under the ticker symbol FB, although whether that’s on the NYSE or the Nasdaq is not yet known.

Included in the filed paperwork was this timeline of Facebook milestones compared to monthly active users: 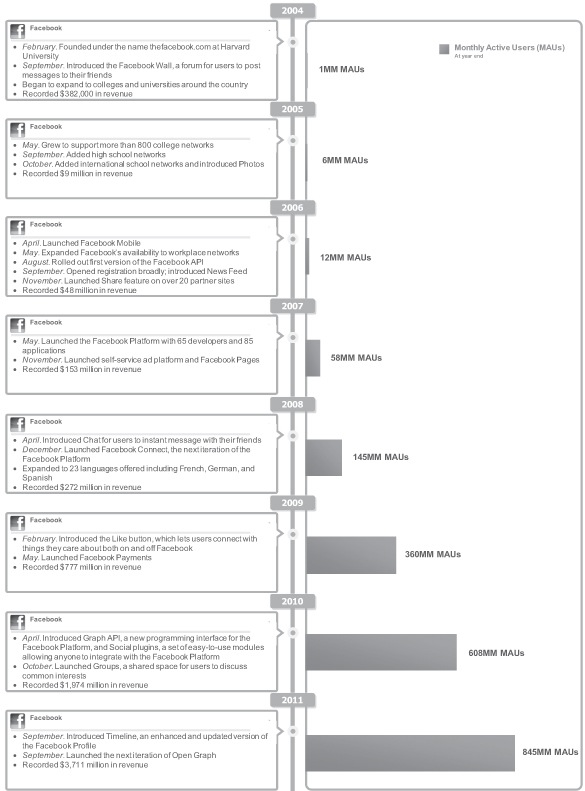