Why did the chicken cross the road? Because that’s what a deceptively simple, fiendishly clever, wildly popular content marketing campaign programmed it to do.

Cast your minds back to 2004. It was the year Facebook (then called ‘Thefacebook’) was launched, a time before Twitter, an age when nobody could have predicted the reach and influence social media would achieve, and an era when the term ‘content marketing’ had barely been coined.

The company was Burger King, the product was the TenderCrisp chicken sandwich, the website was (the now defunct) www.subservientchicken.com. The concept was dressing a man up in a chicken suit and have ‘it’ obey commands typed in by viewers (kind of like an adult cam site), and the result was 46 million visits in one week.

Forty-six million. In 2004. For a subservient chicken. What else can you say except, ‘pluck me!’

Burger King’s campaign was one of the very first examples of the sort of viral content of which every content marketer dreams. Since then, others have achieved similar success for the most unlikely products, from water to forklift trucks to correction fluid (below). 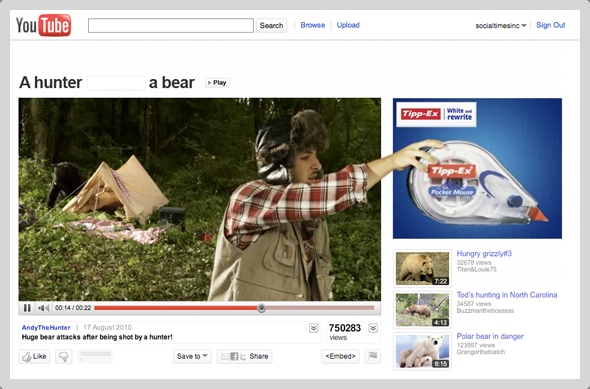 In each case, content marketers have taken a brand or product that, on the face of things, is ‘boring’ and made something engaging, something appealing and, yes, even something sexy. And in each case, they have utilised the following ‘Six Golden Rules of Content Marketing’:

Great content is all about creating the perfect message to sell a product or promote a brand. It is the essence of engagement – speaking in a voice that appeals to the target market. That voice can be funny, witty, moving, irreverent, surreal and even ridiculous, but it has to be consistent. There is no point producing an ad that goes viral but completely contradicts your overall brand message – unless, of course, you’re planning to completely reinvent that brand. Short-term gains, by definition, have minimal impact on the long-term bottom line.

Understanding the target market has always been a marketing essential, but it’s even more important in the online world. TV ads, billboards and the like throw the message out there knowing that somewhere, in some sitting room or in some car, someone from their target market will see it. The difference with online content is that the consumer is in control – they don’t simply receive the information, they actively go looking for it.  So you need to ensure that you have the content that hooks them once they find you. Which brings us to…

Your audience has found you, but your content has to be appealing enough to keep them. Essentially, you have to ask, as Men at Work famously did, ‘Do you speaka my language?’, only instead of just smiling and giving them a Vegemite sandwich, you offer content that wows and a product they want. John Deere Forklifts have done just that through content that turns a functional product into a testosterone-fuelled, machismo-laced must-have.

…or make ’em cry, or make ’em intrigued – the key is to move them, to engage them. If you do that successfully, as Evian has done, you’re on a winner. Remember, though, how you engage customers depends on your target market. Think how many mums now drink Evian.

Although internet-savvy consumers like to feel in control and want to believe they found you independently, you can certainly nudge them in the right direction through content syndication. Social media is perfect for this, particularly since people are increasingly preferring to act on friends’ recommendations rather than being overtly ‘sold to’. Tweet about your content and post it on as many platforms as you can. Orabrush has done this brilliantly with a clever YouTube video that has received over 45 million views, supported by its Facebook presence.

You’ll doubtless have noticed a common theme in all the cases shown in this article. All of them make excellent use of video – visual content, in other words – to engage their target market, establish an appealing voice and get their message across. But that’s not to say you should rely purely on video. Great content can also include music, images, and even (shock! horror!) mere words.

According to The Huffington Post (which itself shows how effective words can be as content), word-centric websites were among the most-visited last year.

Besides, as Professor Dumbledore put it in Harry Potter and the Deathly Hallows, ‘Words are, in my not-so-humble opinion, our most inexhaustible source of magic’. And let’s face it, Harry Potter creator JK Rowling knows a thing or two about creating content with an appeal that goes far beyond the reach of even the most viral of viral videos.