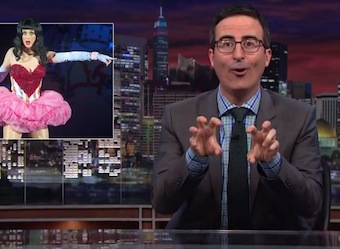 Comedy news host John Oliver has delivered a cutting take-down of native advertising, comparing it to raisins in cookies (nobody wants them there) and Katy Perry (enjoying it feels wrong).

While noting that brands sponsoring news content is not new, John Oliver, host of HBO’s Last Week Tonight, delivered a segment on Sunday night (US) describing the creep of native advertising into the public consciousness. It has accelerated in recent months as new media businesses, such as Buzzfeed, build business models centred around native advertising, and established news organisations seek to replace print advertising revenue with new digital marketing products where display advertising could not.

He points out the acceptance and/or doublespeak of organisations such as Time Inc or The New York Times, about whether ‘church vs state’ is compromised by native advertising or whether it even matters.

Oliver mentions famous examples of native advertising gone wrong, such as a piece in The Atlantic sponsored by the Church of Scientology, and a piece on changing energy needs sponsored by Chevron. “Spoiler alert: the notion that they’re changing because we f***ed up the Earth thanks to companies like Chevron, is not the conclusion of the article,” he quips.

While noting that there is some pretty good content that is sponsored by brands, Oliver says it’s still uncomfortable: “It’s like hearing the one Katy Perry song that you like. You think, ‘Sure, this is the best possible iteration of Katy Perry… but it still feels wrong to be listening to this’.”

On the cause of this issue: “But before we demonise these organisations for selling out, it is worth remembering this is all at least partially our fault. A press cannot be free and independent if nobody is willing to pay for it. And it seems nobody is going to.”

Oliver’s solution to all this, while a joke, might not be so ridiculous. Watch to the end to see that part.

READ: The restless are native (advertising) – by Damian Ryan »