If you’re a member of any social network at all, you’ve undoubtedly seen the topic KONY 2012 trending this week. The viral campaign has spread across the web over the last three days, but it’s not for any brand or product.

A film and campaign by the Invisible Children movement, KONY 2012 aims to raise awareness of the conflict in Uganda, pushing for the arrest of Joseph Kony, leader of the Lord’s Resistance Army, who’s alleged crimes against humanity including child abduction, torture, rape, among others have placed him at number one on the International Criminal Court’s most wanted list.

At the time of writing the film has been views 15,173,840 times on YouTube, a remarkable number for a video just shy of half an hour long, and only three days old.

YouTube’s analytics are included below, and show that the film has found popularity mainly among teenagers and young adults. Also evident is the journey the film took spreading virally across the web. Uploaded to YouTube on 5 March, it reached almost three million views within the day.

KONY 2012 is a film and campaign by Invisible Children that aims to make Joseph Kony famous, not to celebrate him, but to raise support for his arrest and set a precedent for international justice. 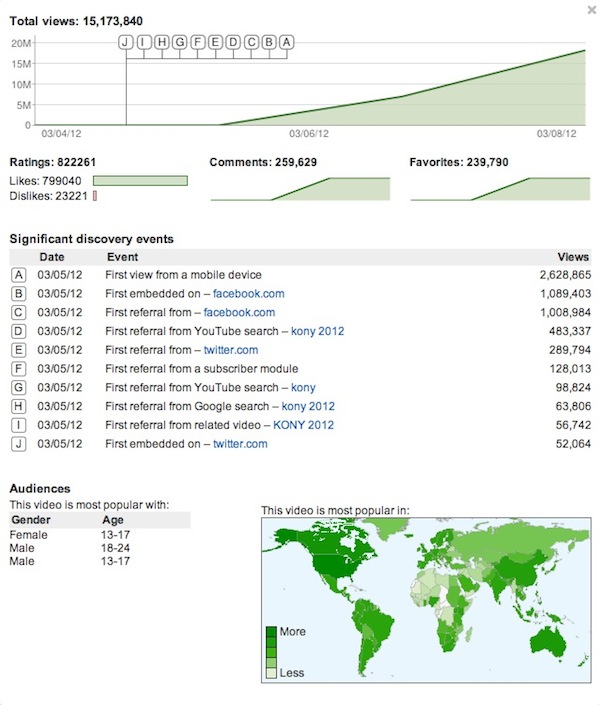 Tags:
Previous Article
What the changes to Facebook Pages will mean for your brand
Next Article
SEO and the backlinks buying conundrum