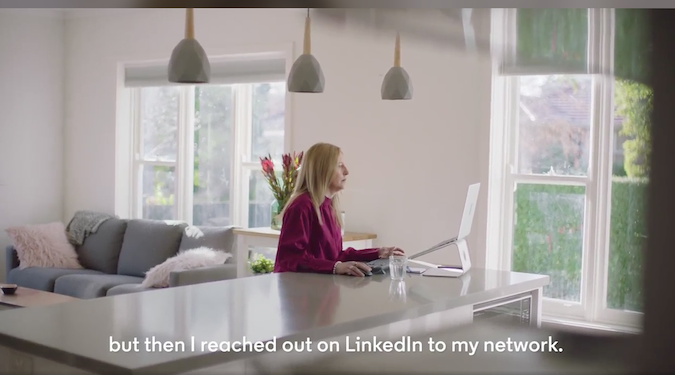 LinkedIn has launched the third iteration of the #InItTogether campaign focused on jobs. The original campaign launched in 2018 but is now particularly relevant as many Australian professionals have found themselves unemployed during COVID-19.

The Australian Bureau of Statistics recently released data revealing that many Australians lost their jobs between April and May, resulting in a 0.7 percent jump in unemployment to 7.1 percent. The timely campaign touches on these themes by featuring the real stories of Australian LinkedIn members as they lean on their networks during difficult times.

One video features a LinkedIn member named Giselle who lost her job due to COVID-19. The campaign shows how she reached out to her LinkedIn network, which led her to secure a job at a new company.

The campaign also features an astrophysicist and robotics engineer named Vignesh Murugan who started a business to bring solutions to the farming industry. His network led him to the Queensland agricultural community and eventually helped him build his business.

“In this distributed work environment, connecting with your community matters now more than ever. The brand campaign is inspired by these everyday stories of our members reaching out to connect with others, generating conversations and gaining meaningful opportunities. Small acts can make a big difference. Our hope with this campaign is that it will encourage more members to reach out and take that first step”, says Shiva Kumar, head of brand marketing and communications at LinkedIn Australia and New Zealand.