It was forecast to be the ‘socialympics’ and it didn’t disappoint, with an estimated 80,000 tweets sent per minute over the course of the 2012 London Games, the first Olympics to experience social media in full flight.

Australians weighed in on the conversation in unprecedented numbers, according to social media analysis conducted by Burson-Marsteller (B-M), which tracked more than 500,000 conversations in Australia alone during the event.

Twitter generated the highest volume of Olympic chatter, thanks to its microblogging nature, accounting for four in every five mentions of the Games. Women were more likely to talk about the Olympics than men, according to B-M, supporting other studies which indicate higher activity among female users.

Sally Pearson was Australia’s most talked about athlete, followed by Lauren Jackson and James Magnussen. Pearson’s victory in the 100 metres hurdles was not enough to elevate the standing of her sport, however, which failed to rival swimming, basketball or rowing for buzz levels.

The most widely discussed news story came from the opening ceremony, with Paul McCartney’s reported payment of a single pound to perform at the Opening Ceremony generating significant interest. 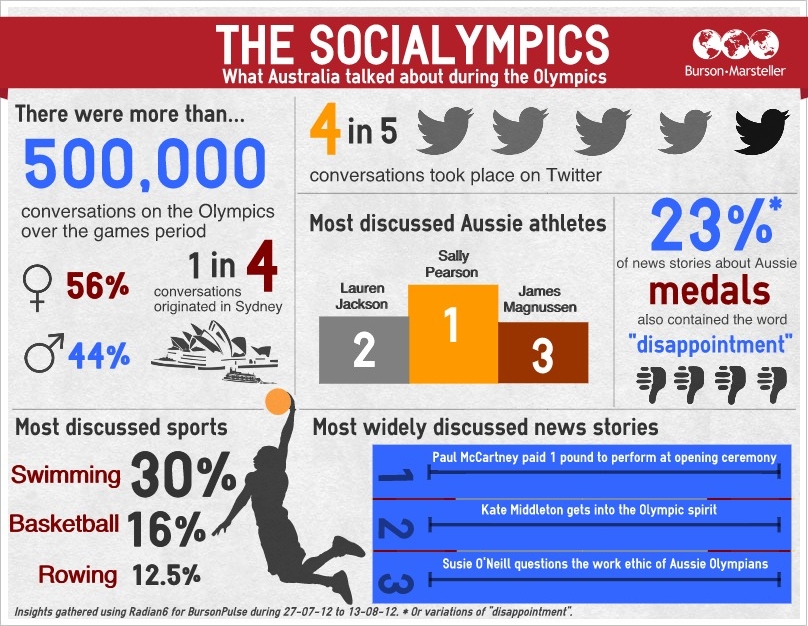