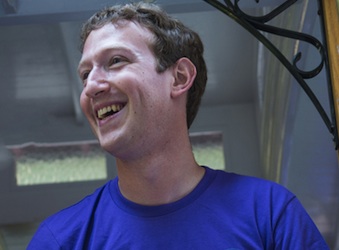 Facebook’s shares have skyrocketed after its announcement that 41% of its ad revenue came from mobile, compared to the 30% of revenue mobile made in the prior quarter. The year before that Facebook made virtually nothing from its mobile applications.

The surge is being put down to the company’s earnings report showing large increases in ad revenue from mobile technology.

Facebook shares were up 26.0% to $33.39 at lunchtime on Thursday (U.S time) which is the highest level since May 2012 and have not appreciably moved higher since the company’s high-profile public offering in May 2012.

The company is making a priority of following its more than one billion members onto smartphones or tablets as lifestyles increasingly revolve around accessing the internet from mobile devices.

Facebook reported net income in the second quarter of $US331 million compared with a loss of $US157 million in the year-ago period.