Advertisers are abandoning Kyle Sandilands’ Austereo shows in droves due to a consumer-led reaction to his attack on a female journalist who criticised he and co-host Jackie O’s television show.

The one-off special, A Night with the Stars, was a flop for Channel 7 and received a panning in the wider media and from viewers online. News.com.au reporter Alison Stephenson’s review of the show branded it a ‘disaster’.

After Sandilands – who is no stranger to controversy – used his morning radio show to launch a spectacularly personal and threatening attack on the journalist, major advertisers began distancing themselves from the Kyle and Jackie O Show, followed by those advertisers pulling their commercial support altogether.

Blackmores is the latest to cancel its commercial arrangement with Austereo, following the lead of Holden, Medibank, Vodafone, The Good Guys and Fantastic Furniture.

Vodafone, a sponsor of the Sandilands-hosted Take40 program, announced through its Twitter account that it would be pulling out due to the reaction of social media users.

Now, a flood of comments on Harvey Norman’s Facebook page is putting pressure on the electrical and furniture chain (which opened its ecommerce site only yesterday) to withdraw its advertising in order to pressure Austereo into taking action against Sandilands.

Sandilands’ told listeners, “Some fat slag on news.com.au has already branded it a disaster. You can tell by reading the article that she just hates us and has always hated us… What a fat bitter thing you are. You’re deputy editor of an online thing. You’ve got a nothing job anyway. You’re a piece of shit… This low thing, Alison Stephenson, deputy editor of news.com.au online. You’re supposed to be impartial, you little troll.

“You’re a bullshit artist, girl. You should be fired from your job. Your hair’s very ’90s. And your blouse. You haven’t got that much titty to be having that low cut a blouse. Watch your mouth or I’ll hunt you down,” he threatened on air.

Consumers are threatening to boycott Harvey Norman, and other advertisers, unless it terminates its association with Sandilands. From Harvey Norman’s Facebook page: 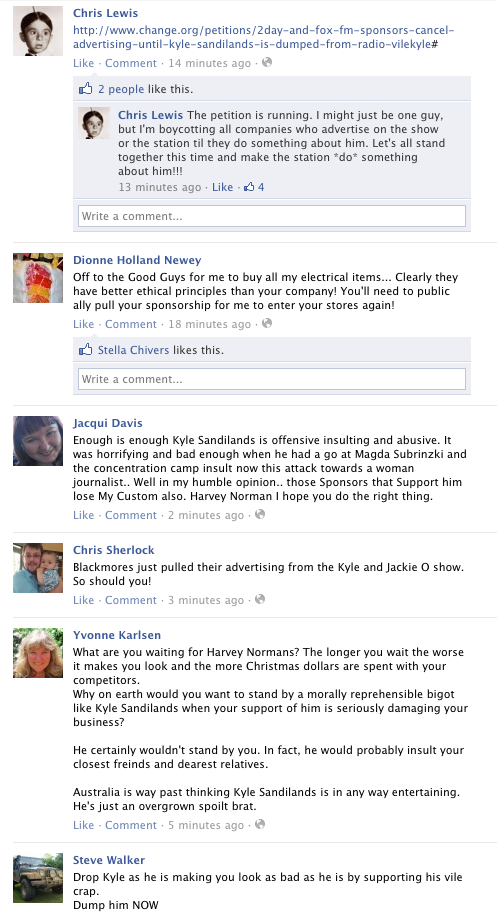