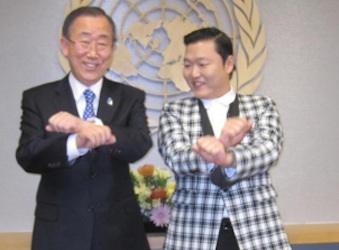 All leading international organisations have a Twitter account, and half of their leaders have active personal accounts on the social network, a new study has found. The ‘Twiplomacy’, has looked into how world leaders and government agencies are using Twitter.

The most followed international organisation was the United Nations Children’s Fund (@UNICEF) with more than two million followers, and is also the second most effective organisation after the European Organisation for Nuclear Research (@CERN). Both organisations’ tweets are retweeted on average more than 100 times each.

“This study illustrates how organisations can use Twitter in a novel way with the innovative use of hashtags, Twitter Q&As and direct message campaigns that can make a big impact regardless of the number of their followers,” says Jeremy Galbraith, CEO of Burson-Marsteller Europe, Middle East and Africa. “It is interesting to see that while half of the heads of international organisations have personal Twitter accounts, few tweet themselves.”

Nabil Elaraby, the secretary general of the Arab League is the most followed head of an international organisation with more than 346,000 followers, followed by Christine Lagarde, the head of the International Monetary Fund (IMF) and NATO’s Secretary General Anders Fogh Rasmussen, in second and third position respectively with more than 150,000 followers each.

International organisations who signed up to Twitter in 2007 and early 2008 are among the most followed today. Five of them have more than a million followers each, namely @UNICEF, the @UN, the World Economic Forum (@Davos), the UN Refugee agency (@Refugees) and the World Wide Fund for Nature (@WWF).

The study also investigated location, Geneva-based organisations have a total of 6,197,506 followers, while New York organisations follow in second place with 5,598,909 total followers.

Fifty heads of international organisations have personal Twitter accounts that are either managed personally or with their teams. Twitter has played a crucial role in the election of Roberto Azevêdo, the new head of the World Trade Organisation (WTO), who tweets as @WTODGAzevedo. The first act of the new Secretary General of the United Nations Conference on Trade and Development (UNCTAD), Mukhisa Kituyi, was to set up his personal Twitter account @UNCTADKituyi.

The Secretary General of the East African Community, Richard Sezibera, is perhaps the most conversational head of any international organisation, more than 65% of his tweeting are replies to other users.

Overall, international organisations were found to be less conversational than their leaders with the notable exception of @Eurocontrol, the European Organisation for the Safety of Air Navigation, which has been answering questions about flight delays since the eruption of the Eyjafjallajökull volcano in Iceland disrupted air travel across Europe in 2010.

The World Economic Forum (@Davos) and the @GlobalFund have recently run direct message campaigns, reaching out directly to their most influential followers on Twitter to push their reports and campaigns. They are also among a handful of account enabling any follower to send them direct messages, effectively opening up a new two-way channel of communication.

“Credit goes to the social media managers in each organisation who are often alone to manage an organisation’s Twitter account and other social media platforms on top of their day job. Organisations that put more resources into their digital communications are the ones who will be most effective over the coming years,” notes author of the report, Matthias Lüfkens.