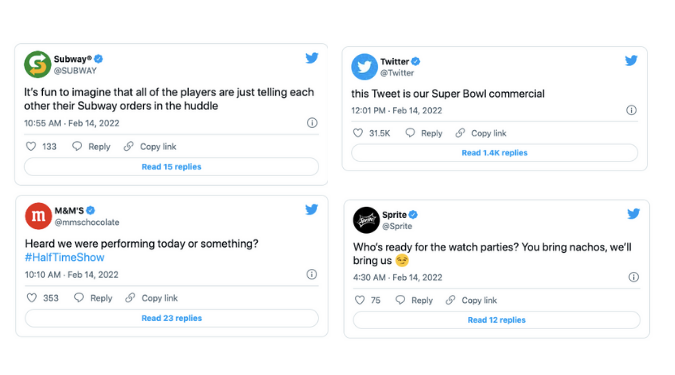 It’s advertising’s biggest day on the calendar. The Super Bowl ad spots cost in excess of $7 million USD, but it’s also a time for brands to flex funny muscles on Twitter.

Taking to the microblogging platform, brands use Twitter to spark conversation and be part of the cultural phenomenon. Each year, social media managers across the United States and beyond use the sporting event to drum up engagement. From Oreos to Burger King and even Twitter itself, what was being said this Super Bowl?

Here’s a thought: Replace the ball with an OREO cookie

Yelling at the TV like you’re the head coach? Maybe you just need a SNICKERS. #SuperBowl

did you see that play for the points? wow.
-tostitos community manager

how many french fries to cover the whole field

imagine just watching the game and not being a brand tweeting

It's the #SuperBowl but how can I make this about me?

Who’s ready for the watch parties? You bring nachos, we’ll bring us