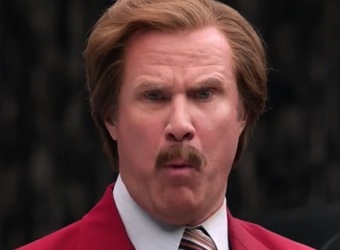 Watching the Anchorman 2 – The Legend Continues promotional trail blaze through Australia this week has been not only highly entertaining but a lesson in the new rules of content marketing.

There has been a book, brand partnerships and even a public standoff with Australian television icon Ray Martin on Network Ten’s The Project.

Before hitting Australia, Burgundy and his network aficionados weighed in on the federal election and the AFL grand final. Even Baxter, Ron Burgundy’s dog  (who comes complete with his own Facebook page and loyal following) posted a picture of himself attending the Melbourne Cup, sporting a hat and miniature Australian flag.

The marketing campaign has shifted to suit location, and different cultures. Recently Ron Burgundy (Will Ferrel) has been spotted across the globe, cycling with Daft Punk for the MTV music awards and pairing up with Irish newsreader Anne Doyle for a special Irish-tailored trailer.

Perhaps the biggest operation behind the marketing campaign is Anchor Man‘s tumblr page, which enables fans to generate their own memes and also audition to join Ron’s prestigious news crew. Fans can choose to audition for team Ron (anchor man), team Brick (weather man), team Champ (sports reporter) or team Brian (field reporter). The winners will receive invaluable feedback from the self-appointed ‘best News Crew this side of everywhere’.

It is possibly due to the constant stream of user-generated content encouraged by Paramount, that Anchor Man 2‘s Facebook page has over three million ‘likes’.

Paramount is also marketing Anchor Man 2 with traditional methods, partnering up with multiple companies to promote the film. Ben and Jerry’s are releasing a limited edition of ice cream ‘Scotchy Scotch Scotch’, Jocky are releasing line of underwear inspired by the movie, and Ron Burgundy appears in the latest advertisements for Chrysler’s Dodge Durango.

The marketing for the film, which is due for release on 20 December, has been engaging, entertaining, and above all else appears to have saturated our local media landscape without being overbearing or horrendously obvious *cough, Dan Aykroyd*, which is something as marketers we can all learn from and aspire to.

Tags:
Previous Article
‘Twiplomacy’ – world leaders moonlighting as Twitter kings
Next Article
To go shopping is glorious – how brands can succeed on the Chinese shelf