7.3 million and cashed up – but nobody’s marketing to them

7.3 million and cashed up – but nobody’s marketing to them 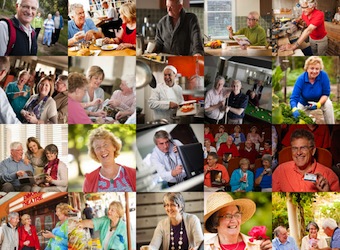 Guess what? The young, sexy market doesn’t have anything like the buying power of the over-55s. Less than a handful of marketers are catering to this, the largest, growing sector of consumers in Australia.

With the youngest of the baby boomers now in their mid-to-late 50s, the sector is large and growing ever larger. People are living much longer, and can expect many more years of leisure and spending time than ever before.

These people also want cars, boats, real estate, home renovations, travel, computers, mobile phones, wine, clothing, food. Just about every consumer product or service available. The majority of them also eat out, attend movies and shows regularly and read books in both traditional format and e-readers. They also want to stay fit and play sports, from golf to tennis to yoga to tai chi.

And most brands, marketers and advertisers don’t know how to talk to them.

“There is a boom in mature women travelling and wanting safe and interesting experiences. Like behind the scenes and off the commercial tour, living with a French family for a week is more appealing than the whistle-stop six places in six days ‘and here is the souvenir shop’.” She says women, particularly, like the camaraderie of a group, which allows people to go at their own pace.

Walker, who started the agency in Melbourne just over 10 years ago, also says older Australians are a growing market for the wine industry, with 970,000 aged 50-64 saying that they drink more wine than they used to. And on average boomers have $376,000 in savings and 29% of them are intending on spending on home renovations in the next 12 months.

This year 271,000 more Australians will turn 60, which will take the senior population to 4.57 million, over a quarter of the total population. Also by the end of 2013, the total over-50 population will be 7.49 million, representing 39% of the adult population.

And if you think seniors don’t use and contribute to social media, think again. At a recent conference in Sydney for online community managers, Chloe Davis of Tourism Australia talked about how the travel body turned their social media platforms over to their fans that sent in hundreds of photos every day. Davis revealed that Tourism Australia’s biggest Facebook contributor of photos and content is 83-year-old ‘Harry’ from Scone in country NSW.

An international ad agency aimed at the over-50s market, Senior Agency, with head office in Paris and locations around the world, has its Australian office in Sydney.

Chris Cormack, group managing director Australia and owner of Senior Agency locally, has a wealth of experience in advertising and in this specific market, having managed marketing campaigns in Australia, the UK and Asia.  He says the over 60s’ media habits are very fragmented, just like other generations. “They rely heavily on traditional media such as newspapers, and are the only segment that really read the local newspapers as they are.”

Cormack says it is easy to pigeon-hole these people. For instance the fact that they are big radio listeners doesn’t necessarily mean that radio advertising is the best medium.  He says they are also big users of the internet and sites such as Facebook.  And he points to targeted media channels such as a specialist website dedicated to the 50s and older, Your Life Choices.

Cormack says of newspapers the main reasons this sector reads them in their entirety is that they are, first, community minded and want to know what their assets are worth, second, have the time to do so, and, third, to see who has died.

He says that radio can be a cost-effective medium if you have the budget for repetition.  But the ad campaign needs to include in the call to action, a compelling offer just for them. “They love an age-based discount. A reward for all they have done!” Cormack says.

The rivers of gold in this segment are in direct marketing, says Cormack.

Operating out of Brisbane is Starts At Sixty, an online community for (you guessed it) people aged 60 and over with active lives. The lively, engaging site has been a labour of love for Rebecca Wilson and Kate Chaundy and it includes blogs, news, current affairs, health, humour, entertainment, money and travel.

Wilson started the site, inspired by her own parents and parents-in-law who are active sixty-somethings. For the most part they all still work, at least part-time, and their very busy lives are filled with grandchildren, friends, travel, shopping and various other activities and hobbies.

Reported in the Wall Street Journal recently, the giant youth car advertising behemoth in the US is for the most part not selling to the youth, they are selling to the over 55s. The headline says it all: ‘Who’s buying ‘youth’ cars? Seniors.’ The auto industry continues to target 18-34 year olds who account for only 12% of sales. Meanwhile they essentially ignore the 88% of the population who actually buy these ‘youth’ cars.

And The New York Times reported in June 2013 that a study found driving by young people decreased 23% between 2001 and 2009. The younger population doesn’t value cars and car ownership, they value technology – they care about what kinds of devices you own. The percentage of young drivers is inversely related to the availability of the Internet, research has found. Why spend an hour driving to work when you could take the bus or train and be online?

Still in the US, Bob Hoffman, a marketing consultant with a long and distinguished ad agency career, writes a blog about the baby boomers and beyond sector, The Ad Contrarian. Hoffman, who has also written a best-selling book about advertising, points to many mistakes marketers make when trying to reach this group.

He writes about the auto industry’s advertising in depth and most recently singles out the launch of Microsoft Surface – a tablet computer that snaps to a keyboard to make it a laptop – as a gigantic miss when it came to reaching the biggest and most important tablet and laptop market. Hoffman points out that the US commercials for the Surface consisted mostly of “young people jumping around” and had no relevance to the over 55s, thereby completely missing its biggest sales opportunity.

As a parting point, consider this: in 2012 in Japan adult nappies outsold baby nappies for the first time. While that may or may not be relevant to your organisation, it makes a pretty good case for challenging any and all assumptions on which we go to market.