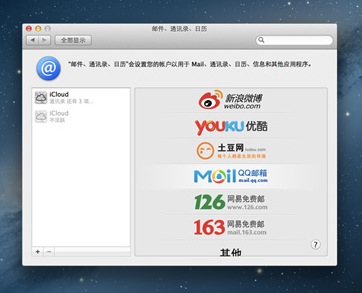 Apple has signalled a desire to encourage the exploding number of Chinese Mac users by including some significant China-specific features in its upcoming desktop operating system dubbed ‘Mountain Lion’, news of which broke late last week with an official announcement on Thursday (US time).

Along with a number of features that will continue to narrow the gap between Apple’s desktop/laptop operating system (OS X) and that for its mobile devices (iOS) comes system-wide, built-in support for popular Chinese email services QQ, 163 and 126, social networks Sina weibo, Youku and Tudou, and search engine Baidu, the country’s top-ranking website and fifth globally.

Apple’s Mountain Lion preview page lists 11 highlights of the upcoming operating system, the last of which is ‘All new features for China’. From Thursday’s release:

Apple CEO, Tim Cook, says that even with the success of the company’s mobile devices outshining that of the Mac in terms of sales, it is still ‘incredibly important’, especially in markets such as China, where Mac sales doubled last year: “They love the iPhone and so they then search out and look for the Mac,” Cook told The Wall Street Journal, in an apparent acknowledgement of what analysts have dubbed the ‘halo effect’, where the popularity of the iPhone, iPad and iPod attracts new users to Apple’s desktop PCs.

On a related note, the announcement of Mountain Lion came as a surprise to many in the tech press as Apple, usually the subject of countless rumours around upcoming product launches (type ‘iPad 3’ into any web search), managed to keep this announcement quiet up until its official release on Thursday.