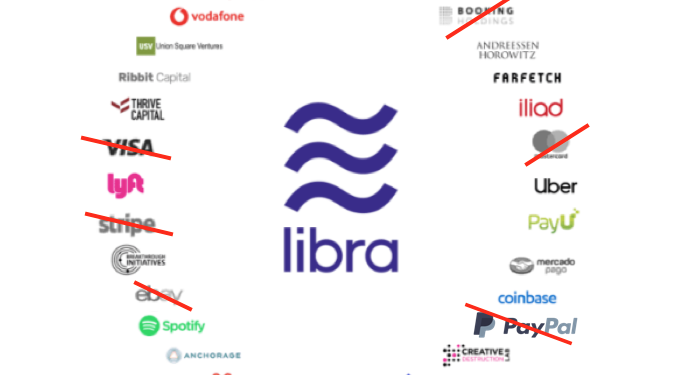 PayPal may have unwittingly set the exodus in motion, being the first to give up its founding membership in the Libra Association. In the week since, Mastercard, Visa, eBay, Stripe, Booking Holdings and Mercado Pago have also rescinded their participation in Libra, significantly decreasing Libra’s likelihood of being taken seriously in the market.

“It requires a certain boldness and fortitude to take on an endeavour as ambitious as Libra,” said Dante Disparte, head of policy and communications at the Libra Association when PayPal left, “a generational opportunity to get things right and improve financial inclusion.”

According to reports, the former Libra members were most likely scared away by heavy scrutiny from regulators and lawmakers. In some not so uncertain terms, US senators Brian Schatz and Sherrod Brown told the CEOs of Visa, Mastercard and Stripe in a letter, “If you take this on, you can expect a high level of scrutiny from regulators not only on Libra-related activities, but on all payment activities.”

eBay’s leaving statement left the door slightly ajar, “We highly respect the vision of the Libra Association; however, eBay has made the decision to not move forward as a founding member.”

Other departing companies have mostly attempted to do so on similarly amicable terms, though Visa has been the first to directly cite concerns of regulatory pressure. “Visa has decided not to join the Libra Association at this time.”

“We will continue to evaluate and our ultimate decision will be determined by a number of factors, including the Association’s ability to fully satisfy all requisite regulatory expectations.”

The departure reduces the Libra Association’s founding cohort from 28 to 22 companies, leaving the likes of Spotify, Lyft and Vodafone in the ranks.

What’s left of the Libra Association reportedly met on Monday to elect board members for the initiative.

Speaking in front of the Senate Banking, Housing and Urban Affairs Committee hearing on ‘Examining Facebook’s Proposed Digital Currency and Data Privacy Considerations’ three months ago was David Marcus, who spearheaded the Libra project before it was public and now acts as head of Calibra (Facebook’s digital wallet Libra interface) at Facebook.

At the hearing, Marcus continued to tout Libra as a noble mission to connect the finances of people across the world.

Facebook CEO Mark Zuckerberg will face the House of Representatives in his testimony scheduled for Wednesday 23 October. It’s unlikely to be the most cordial of hearings, with many US lawmakers already having expressed their scepticism of Facebook’s sincerity – particularly given their previous interactions.

Upon announcing Zuckerberg’s summoning, Congresswoman Maxine Waters also name dropped the ‘Keep Big Tech Out of Finance Act’ draft bill, designed to ban large technology companies from attaining licenses that would validate them as financial institutions in the US.