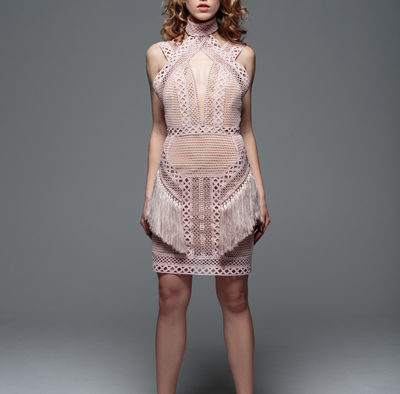 The Cognitive Collection is an exploration into unconventional design in which Grech used cognitive systems – a programme that is able to understand structured data and unstructured data, such as images, and can reason, learn and interact with people – to design the collection. This is an entirely new creative approach for Grech, taking a a data-driven approach to design and decision making.

To create the designs with Grech, IBM has used a mix of Watson application programming interface, including Watson Visual Recognition, and cognitive tools from IBM Research to provide insights into fashion trends, consumers and design possibilities.

Grech, whose designs are inspired by his love for architecture, created his couture collection with Watson by matching architectural images with fashion images, providing the inspiration for new designs. “Watson gave us a direction, helped evaluate risk and maintain confidence in the collection,” says Grech.

With the ability to analyse ten years of runway fashion images and real-time social buzz, Watson’s visual recognition technology not only analysed but predicted trends in colour. “Working with IBM to create the collection allowed us to work with a colour palette we would not have considered before. This is the first time I have worked with pastels for my collection,” Grech adds.

Grech’s collection at Melbourne Spring Fashion Week is the first time in Australia that artificial intelligence has been used in combination with creative thinking and design process.

Earlier this year, Watson was also used to create the first cognitive dress at the Manus X Machina Met Gala. You’d remember this dress, that was not just turning heads at the red carpet but had 150 LED lights that changed colours determined by Watson’s Tone Analyser – a programme that  reads through and interprets the tone of people’s reaction to the dress and picked a hue that corresponded to the emotional consensus.

Created in collaboration with IBM and fashion label Marchesa, the dress was worn by model Karolina Kurkova and proved to be a fine example to show how cognitive computing can unlocking creativity and discovery.

Watson has previously tried its hand at other professions in similar demonstrations. In 2014 IBM launched the ‘Cognitive Cooking’ initiative, which saw Chef Watson design recipes, open a food truck and author its own cook book.