A long period of stagnation and declining importance of brand values may have come to an end after Kraft Foods was valued at a massive US$41.3 billion, following its acquisition by the newly formed Kraft Heinz.

The historic valuation shatters the previous record set by Gillette in 2005, which was US$25.5 billion.

Valuation and accounting of brands has been common practice in Australia since the eighties and since 2004, all acquired brands are required to be valued and reported separately as part of new accounting standards.

One of the earliest notable brand valuations came in 1988, when Grand Met acquired Pillsbury for the vale of US$4.8 million. Values have steadily risen since then and by the year 2000 the record figure stood at US$11.7 billion after Phillip Morris acquired Nabisco.

That record stood until 2005, when Procter & Gamble acquired Gillette at a value of US$25.6 billion. Since then the acquisition of Anheuser-Busch in 2008 by InBev (US$24.2 billion) is the only number to come close to matching the figure set by Gillette.

The acquisition of Kraft by Berkshire Hathaway-backed Heinz smashed all previous brand value records by almost 60%, according to data released by Switzerland-based brand value database Markables. 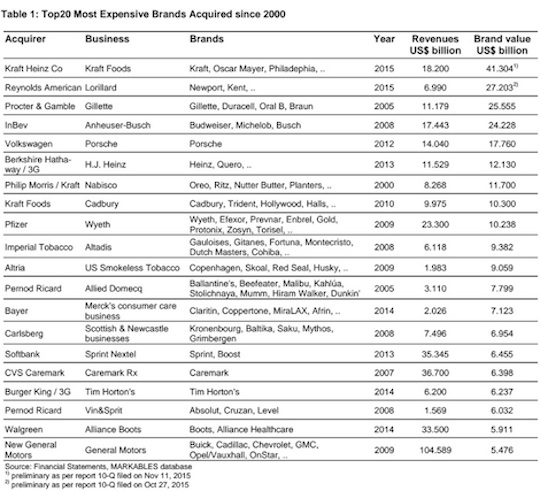 This was consistent with the steady decline in the total deal value of acquired brands, which fell from 17% to 12% between 2004 and 2014. In this time customer relations rose from 8% of deal value to 18%.

However, 2015 proved to be a turning point in the trend. In addition to the record high set by the acquisition of Kraft Foods, the acquisition of Lorillard (Newport cigarettes) by American Reynolds, also in 2015, marked an all-time number two at US$27.2 billion.

The surge is likely to add fuel to the enduring debate among marketers, accountants and investors on the reliability of brand valuation methods and the firms evaluating them.

Tags:
Previous Article
Weight Watchers rebrand invites all to ‘live bigger’
Next Article
How brands around the world are live streaming their way to engagement