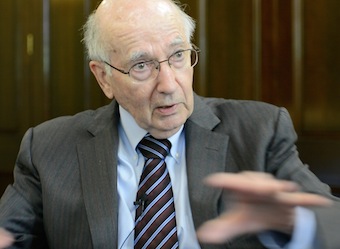 MarketingTV sat down with renowned marketing author and consultant Philip Kotler after his keynote speech at the World Marketing and Sales Forum in Melbourne.

Marketing: On the concept of Marketing 3.0, can you describe it briefly and give some advice to marketers who are hoping to go in that direction?

Philip Kotler: You know, Marketing 3.0 started with a simple idea. We looked back at the history of marketing and realised that most of the early product-oriented marketers were simply trying to make a sale of whatever they had and get the sale against competitors by showing that their product functioned better. It was a very rational appeal. We named that stage ‘1.0’ marketing – just prove that your product is superior to that type of customer.

Then we realised there were a lot of superior companies competing. They all were offering something pretty much the same. So we said: appeal more emotionally to your customers and differentiate emotionally. You could use appeals like fear appeals, love appeals, shame appeals. That was called ‘2.0’ marketing.

Marketing 3.0 is rarer in that we noticed that there is a whole world of people who don’t have much money. A company might work and focus on maybe helping them – through lower prices and so on – have some necessities of life. That would be a company that shows compassion.

I’ll show you how this works. Let’s say a company is a global company, a multinational. Therefore, they can’t charge the same price in Africa that they charge in the US or in Europe.

If they are practising 3.0 marketing, they are adjusting their prices and even their formulations to bring down the cost, because they are compassionate and they want more people to be able to afford the product. That’s what the book is about [Marketing 3.0: From Products to Customers to the Human Spirit, co-authored with Hermawan Kartajaya] – a lot of trends that are making up new marketing thinking.

M: What about some specific companies that you think are doing a good job of Marketing 3.0?

PK: I would say Starbucks is a good example. They work very closely with the coffee growers. They make sure that the coffee growers are not exploited. As a matter of fact, they even, in some of the villages, put up health clinics and recommend schooling for the girls as well as the boys. They express their caring in that way.

The Body Shop, started by Anita Roddick, was also compassionate. She says, “Our skin products are good at skin care, but they’re not going to make you look beautiful. I’m not like the rest of the industry that lies to you and gives you dreams of something that won’t happen. But I want to say that, as a company, The Body Shop cares about many causes. We want to help the homeless. We want to save the whales.”

Here was a business that was absolutely doing social marketing, as well as commercial marketing. They were wanting the world to be a better place to live in.

M: One of the questions during your presentation was about CMOs not getting enough recognition or opportunities in the boardroom. Have you got any advice?

PK: Yes, well, here’s my idea on how to get more respect for marketing. First of all, we hope that the CEO understands marketing in the company that we’re talking about. If the CEO says, “All I need is some advertising”, then all that that marketing person and group will do is good advertising. That’s missing most of the power of marketing, which lies in marketing research and strategy, and the future of the business and so on. The first thing is to get the CEO to understand what good marketing is.

Let’s say the CEO does understand good marketing. The CMO should spend 50% of his or her time working with the other functions and not the marketing people. Building relationships with the other departments – to work with them and respect them and have mutual respect – is more important than just doing a great job of marketing without the support of these other departments. Remember, as more companies say that they want to be customer-centred, customer-driven, that means you must get those other departments also to care about the customer. It’s not enough for marketing to be customer-centric and no one else. Those things would help get more respect for the CMO.

Then, of course, to the extent that we’re in a digital age, there are so many more decisions to make about the media, the message and the strategy of competing with others both online and offline.

In other words, there are two mindsets and both are needed in a good marketing department.

M: What about the fact that CMOs are only lasting in jobs for two to three years on average? Is it an issue? What do we need to do about it?

PK: There’s been talk that the average CMO lasts about two years. I don’t trust that number. I’ll tell you why.

Where does the CMO who left the company in two years go? Some of them go into another company to be CMO, which doesn’t mean that there was a disappointment. This person was stolen by another company. What if that person who is no longer the company’s CMO was raised to the vice president of the company? We need more statistics on what happened to those who had only two years in that company.

Second, it is possible that some people interpreted the two-year life of a CMO to mean that the CMO was a disappointment. It is true there are some companies and CEOs that are impatient. They know that it’s costing them a lot of money to hire a CMO and they want results fast.

A smart CEO will realise, and the CMO that was just hired should sit down with the CEO and say, ‘The way I see things it will take me three to four or five years to accomplish what we just agreed should be accom- plished. I hope you don’t expect a two-year miracle.’ If that conversation took place, the CMO is safer to stay on longer.

M: A lot of people have offered modern alternatives to the four Ps. There are the four Cs, the four Es, and three extra Ps and so on. Is it a concept that needs to keep being revisited?

We have for a hundred years had the four Ps, basically. There’s no way to avoid them. They are decisions that must be made by the seller, who has to establish a price and promotion and place and product.

However, some people complain that there are other Ps that are missing. One of them is people, espe- cially in service industries. Another P is packaging. I could say product really takes care of that. Your product is your people in part. Your packaging is part of the product. So I can incorporate some missing Ps.

These other schemes… there’s one about the four Cs, and that’s [saying] that marketing involves customers, channels, competitors and the community, or something like that. That’s fine. That doesn’t interrupt the four Ps. It’s just the structure of the situation.

A book just came out on the four As by a very good marketing person [Jagdish N Sheth]. He means these are the conditions for a market to exist. There must be customers who have accessibility to the product. The product must be affordable.

So: accessible, affordable. There were two other As [acceptability and awareness]. I almost think that those should precede the four Ps. First, define that a market can possibly get the product and pay for it and then set your price, set your product attributes, and the four Ps.

I welcome all those schemes. If someone says they have something better than the four Ps, I am the first one to say, “Tell me about it, and we’ll drop the four Ps if necessary.”

Because the history of science is progress in sometimes actually junking an old framework and replacing it with a whole new way of looking at the situation.

M: What are your thoughts on marketing education these days?

PK: I would say that I’m against a pure classroom approach to teaching marketing, or any subject, where students sit for an hour and listen to someone talk. Today you can read pretty much anything, or you can watch a well-known marketer talking about marketing on YouTube or whatever show.

I want the students to be more action-oriented. I call this ‘action education’. I want them to have projects to do. If I’m teaching pricing, I want them to choose a product that is priced at a certain level and argue on how it may be priced differently, and test their concept of whether that new price would work better, and so on.

I think a lot of schools are getting more action-oriented, involving their people in education. More teamwork.

M: Finally, what are the biggest challenges that you see marketing facing in the future and how are things going to be different for the next generation of marketers?

PK: One of the things we have to realise now is we’re in a digital world and people are very dedicated to their cell phone, which is not just a phone. It’s so many things. That means they have a computer with them all the time. Not only that, they have a woman named Siri and they can just say, “What’s the population of Australia?” Immediately it says, “22 million people.”

Companies must aim to be number one if possible, not to be one of five companies. They have to work hard to be the preferred company by that target group that they have defined as having a certain need.

The skill set involves STP: segmentation, targeting and positioning. Really creating what we call a value proposition that is very attractive and forceful.

According to Kotler, there are four types of CEO

“The CEO will set the tone for what marketing is in the company,” Kotler says, outlining his four types of CEOs, from worst to best: