‘Australia: we have your kangaroos’ – quirky PR stunt from NZ’s Hell Pizza

‘Australia: we have your kangaroos’ – quirky PR stunt from NZ’s Hell Pizza

Despite having only one store in Australia, in Brisbane, the company’s provocative campaign was designed to spark rivalry across the ditch.

This week it put up a billboard in Sydney featuring an image of a blindfolded kangaroo that reads:

Australia, we have your kangaroos. We will put them on our pizza unless you do the following:

2. Let us play State of Origin.

3. Change your flag to this*

* Accompanied by in image of a torn white piece of paper with only a scribble saying ‘AUSTRALIA’.

A video on the company’s New Zealand website contains the same message:

In a quirky PR stunt, Marketing received a package from Hell Pizza with a ransom note and the bloody nose of a toy kangaroo that must have suffered a gruesome fate. 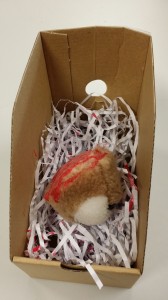 The new kangaroo pizza, called ‘The Boomer’, launches in Hell Pizza stores on Friday and will be available until stocks sell out. The company has sourced 670 kilograms of wild kangaroo meat from Queensland and New South Wales for the pizza, which will also include chargrilled sweet peppers, macadamia nuts, cream cheese and a spiced salsa base.

In April, Hell Pizza attracted controversy with a billboard made from actual wild rabbit skins to promote the first of its wild pizza series.

“We are sure the wild kangaroo pizza will spark more public debate, and we’re very confident that the pizza stacks up on flavour and ethical grounds.”

Hell has also distributed information about kangaroos and the kangaroo meat industry, citing positive attributes of consuming kangaroo meat, including the following three:

“Kangaroos are very well managed in Australia, which means you can eat it with a clear conscience. Many veterinary and animal welfare groups, conservation organisations and ecologists support the kangaroo harvest and it even has RSPCA approval,” Cummings said.

Hell Pizza has 13 stores across New Zealand and is also in London, Brisbane, Seoul and Vancouver.