Big Ron to make a comeback for McDonald’s

Big Ron to make a comeback for McDonald’s 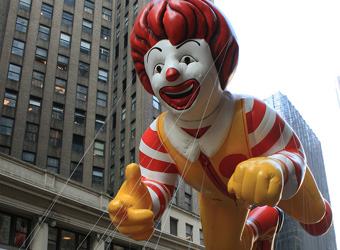 Ronald McDonald, clown-faced mascot of McDonald’s and scapegoat for childhood obesity, is set to make a comeback.

According to comments from McDonald’s chief brand officer reported on Brand Republic the fast food chain is set to make its long-standing mascot a focal point of its marketing activity, a move sure to raise the ire of health campaigners who blame the figure for fuelling childhood obesity.

“He is the best ambassador we have for children’s wellbeing and promoting a balanced lifestyle and getting active.

“People have gone after Ronald for this, that and the other,” Newell adds. “Ronald doesn’t promote food. I challenge anybody to find an ad where they have seen Ronald actually promoting food.”

Ronald – who made an appearance at an event at McDonald’s Olympic venue this week – will be used more heavily in the future to encourage children to take part in a an active lifestyle, Brand Republic writes.

With many childhood obesity campaigners lobbying for the iconic mascot to be banned, the move will likely raise a lot of negative attention around the health of McDonald’s food, an area where the chain has invested significant effort into improving.

Tags:
Previous Article
Turning COI into ROI
Next Article
Your marketing strategy in the media spotlight