‘Decision engine’ Bing has announced a redesign, adding information from social networks to its search results as well as other features to help users make faster decisions.

The new three column layout will include an interactive sidebar dedicated to social results which, unlike when Google introduced social results, will incorporate results from Facebook, Twitter, Foursquare, Quora, LinkedIn, Google+ and Blogger, instead of excluding its competitors.

Explaining the changes in a blog post, Bing says social media and the ability to share in real time “presents an unprecedented opportunity to rethink how search should work. Suddenly an index of documents [websites] that does not embrace these changes is insufficient.”

Bing says that most people use search with the intent of making a decision, but few do so without consulting friends or experts beforehand. Instead of including social results in the core web results, they have been placed into the sidebar, maintaining the separation between the two sets of results to deliver “information from the web to help you take action and interact with friends and experts without compromising the core search experience.”

To allow real-time interaction with social results, users can post questions to Facebook from the sidebar, and tag friends to elicit a response, with the best friends to ask highlighted based on what they ‘like’, their profile information, or photos they have shared. In addition, influential people on the topic and expert reviews will be surfaced.

The core web results will remain unchanged in the new layout, appearing in the left hand column, while a centre ‘Snapshot’ column will feature curated information related to the search, such as maps, restaurant reservations or movie times.

While the update will roll out in the US shortly, an Australian spokesperson says the integration of social will not occur in Australia for some time. “As part of this latest product release, Australian Bing users will see a refreshed user interface from June/July, consistent with the new US design,” the spokesperson says. “The snapshot and social columns will not be rolled out in Australia as part of this initial launch.”

Alongside the announcement, Bing claims to be the preferred search engine when branding is taken out of the equation. A study conducted comparing unbranded versions of Bing and Google, found that 43% of people preferred Bing, while 28% preferred Google.

Google raised the ire of social networks competing with its Google+ service by excluding them from the results of its ‘Search Plus Your World‘ upgrade to, claiming that it was unable to do so at the time. However, a website dubbed ‘Don’t Be Evil’ soon surfaced showing how Google does have the ability to index results from other social sources. 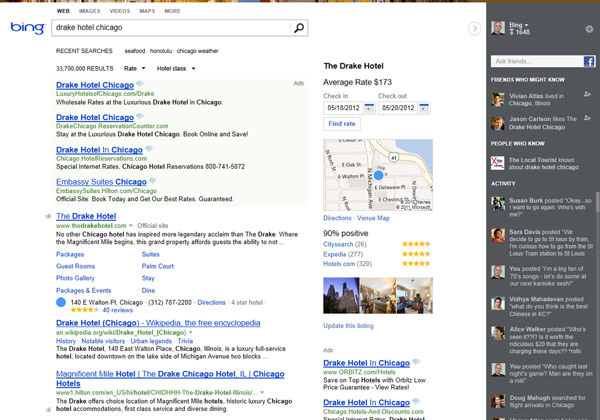