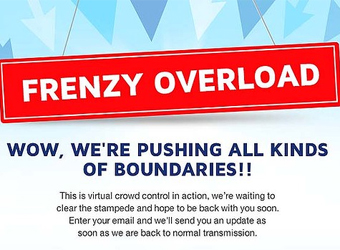 According to news.com.au, many of the advertisers who collectively spent over $1 million on the discount event have requested refunds after the site crashed for several hours upon launch.

The event has been widely panned as a failure, sparking the hashtag #clickfail, after it went down for several hours soon after the sales began at 7pm last night. Several of the retailers who had listed deals on the site, including Myer, Dick Smith, Jeans West, Katies, Quicksilver, Kogan and Harvey Norman experienced service difficulties on their own sites as the traffic was directed through from Click Frenzy.

SmartCompany estimates that some companies spent more than $50,000 and close to $100,000 advertising on the site, through a combination of paid listings, featured content and banner ad placements. Almost 200 retailers took part, according to SmartCompany, with each paying a basic set-up and listing cost of $1,500 plus GST, bringing revenues from that alone to over $295,500.

Director of Click Frenzy Grant Arnott from Power Retail says the “tsunami like” wave of consumer interest in the event was unprecedented. “We had a million and a half to two million querying the site within the first few minutes of the sale.” The sites systems were only equipped to handle one million visitors.

But despite Arnott’s assurances the shopping portal had returned to “full service” from 10pm last night, Click Frenzy continued to experience troubles throughout the day.

Many involved in the sale have today expressed their discontent with the site’s crash. Adore Beauty chief executive Kate Morris told SmartCompany she hasn’t recouped her advertisings costs, and is “extremely disappointed” with how the sale went.

However, not all retailers involved were disappointed with the results. Cofounder of eyewear retailers Sneaking Duck, Michael Fox, says yesterday was the best traffic day in the online retailer’s history and the 24-hour period (Click Frenzy ends at 7pm tonight) should see record sales.

“One of the big issues it highlights is that Australian online retailers need to improve their technology platforms,” Fox writes on his blog.

Joe Barber, founder of Modapt, which helps sites tailor to meet high demand, agrees with Fox’s sentiments. “Website technologies have simply failed to address the staggering increase in demand,” he says. “Instead of focusing on performance and the ability to handle large volumes of traffic, existing technologies have focused on catering to the needs of developers, who are under pressure to deliver more and more features to their clients.”

Arnott defended yesterday’s crash, saying it wasn’t so much a failure so much as a “dramatic starting point”. He predicts next year’s event will be “simply amazing”.