Brands flock to Google+ but consumers slow to follow

Brands flock to Google+ but consumers slow to follow

The world’s largest brands are flocking to Google+ and engagement with their content is increasing, but the number of users and frequency use commanded by the now six month old social network is remains low.

According to data acquired by Marketing, Google+ was visited by only 6% of the Australian online population, or around 1 million people, in March, with the average visitor to the site making between two and three visits per month and spending around five minutes on the site per session. In comparison, Facebook was visited by 68% of the active online population who made an average of 31 visits and spent over 15 minutes per session, according to the data sourced from Nielsen’s Online Ratings.

Head of Nielsen’s media unit, Matt Bruce, says the bar for evaluating Google+’s performance has been set high by the comparative success of Facebook, Pinterest and Google’s other services.

“Any other social network that launched less than a year ago that had a unique audience of a million [in Australia], we’d be saying it was pretty successful.”

Bruce says use of Google+ appears steady, but with relatively low usage among the younger generation, it doesn’t look to be on a high growth trajectory. “It doesn’t seem to have captured the imagination of the youngsters, which is typically where these hot services take off.”

Instead users of the service skew towards the ‘at work’ demographic, and heavily towards men 18 to 49 years of age, whereas Facebook is more representative of the general population with  a slight skew toward women.

While the general public appears slow to take up the service, despite promotion focussing on hangouts including recent events with MasterChef winner Hayden Quinnn and an underwater hangout from the Great Barrier Reef, big brands are jumping on-board to engage with users and also enhance the social side of their search ranking.

American social media analytics firm Simply Measured, found that out of Interbrand’s Top 100 brands list, 64% have created a Google+ page and of those, 22% have more than 100,000 users in their circles.

The top four brands on the list, which is based on brand strength in the US but looks at global Google+ pages, sit in the luxury category, with Ferrari leading the charge, commanding almost 740,000 followers as at May 9, 2012. Combined, the top four (Ferrari, Gucci, H&M and Burberry) boast more than 2.5m in their circles. 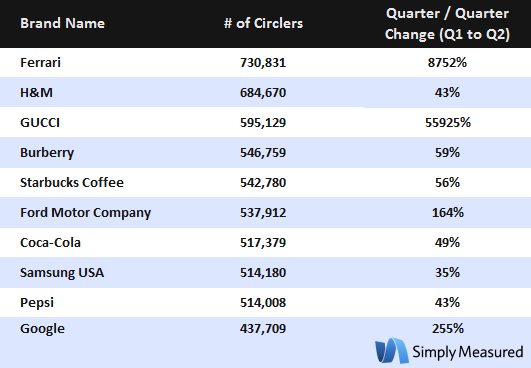 Some have experienced impressive gains over the past three months, with Gucci up 55,925%, Ferrari up 8752% and Nike amassing almost 190,000 users since joining two months ago.

According to Simply Measured CEO Adam Schoenfeld, Google+ is becoming an attractive place for brands, now that the user base has broken the 100 million mark globally. The social network passed the milestone in March, when Google announced that half of these users are active on a daily basis.

In parallel with circle numbers, engagement is increasing for the brands analysed in Simply Measured’s study. Re-shares, +1s, and comments continue to follow an upward pattern and engagement with video has increased 115%, with photos by 59% and with posts by 105% in the past three months. 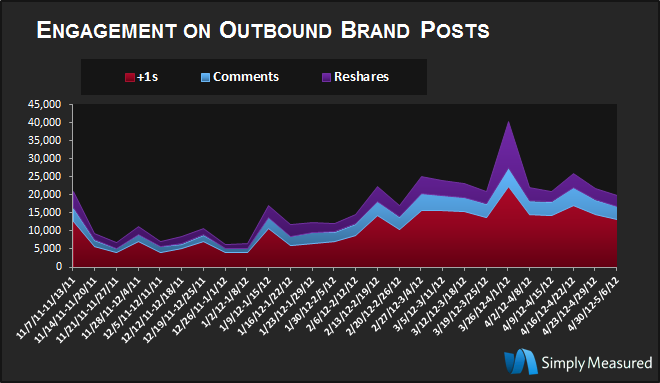 The point of highest engagement was found to be 9:00am on a Wednesday  morning.

Brands using the service may do so before its reached a critical mass, but may be simply putting in a position of influence if the relatively young social network continues to grow.