Broadcast television viewing remains strong, up 26 minutes per month year-on-year despite a 22% increase in internet-capable TVs in Australian households.

Nielsen, OzTAM and TAM’s latest Australian Multiscreen Report shows in Q2 2014, Australians watched 97 hours and three minutes on average of broadcast television, both free-to-air and subscription. This figure, slightly more than three hours per day, has remained consistent over the past decade.

Internet-capable televisions are now in 27% of homes, up 22% since this time last year.

The report finds live and playback viewing has remained steady for the past two years but other screen use is rising.

While continuing broadcast television habits, Australians are taking up new ways to use their TV sets such as using games consoles, personal video recorders (PVRs) and over-the-top (OTT) internet services.

Streaming videos on PCs, tablets and smartphones is slowly increasing. 18 to 25-year-olds watch more online video than other age groups. Each month, the average Australian is viewing online video for:

But people are still mostly using their TV screens – 89% of all video viewing including broadcast and non-broadcast content is on traditional television sets (97 hours and 3 minutes). 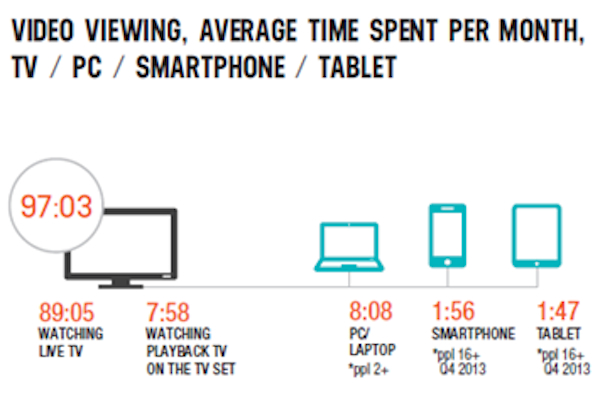 55% of Australian homes have at least one PVR, and the average Australian spends just less than eight hours a month watching playback. The figure has only slightly increased since last year.