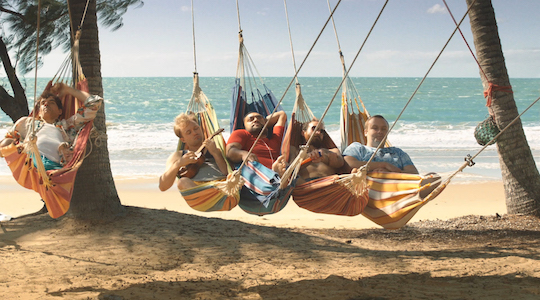 In response to more casual daytime drinking occasions, Leo Burnett Sydney and Diageo have launched the product name and campaign for Lazy Bear, the new pre-mixed drink in the Bundaberg Rum range.

The TVC features five mates enjoying a lazy afternoon by the beach in hammocks, swinging in arcs like a Newton’s cradle to fetch fresh bottles of the drink.

Viewers are also encouraged to keep an eye out for the iconic Bundaberg mascot Bundy R Bear, who makes cameo appearances across seven different versions of the ad.

The campaign, directed by Steve Rogers, Revolver, will also run across cinema, outdoor, digital and social and was launched to coincide with the NRL preliminary finals.

“We’re excited to be launching a campaign that brings to life lazy time with our signature humour and reintroduces Bundy R. Bear to surprise and delight everyone who’s been missing him from our screens,” says McLeod.

Related: Coopers Brewery has turned to the big screen as part of a national campaign to promote its beer Coopers Sparkling Ale »

For the latest insight, opinion, and case studies on Australian brands and campaigns, purchase a subscription to Marketing