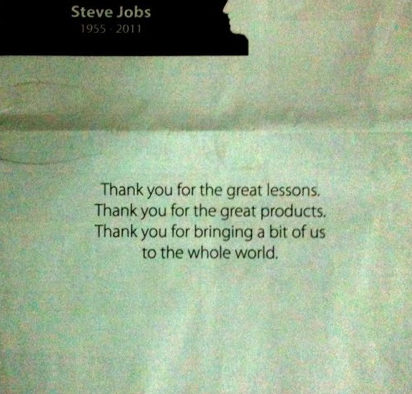 The passing of Steve Jobs last week affected many, and across all social media platforms, condolences and messages of gratitude were expressed. Boutiques of flowers lay in the front of Apple stores globally and Apple.com and all regional subdomains feature a prominent tribute image of Jobs.

In Singapore yesterday, newspaper The Straits Times ran a full-page ad taken out by chairman and CEO of Creative Technologies Sim Wong Hoo that paid tribute to Jobs. 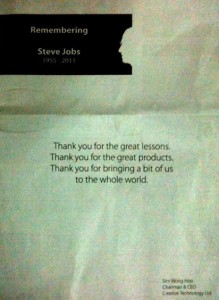 (Taken from The Straits Time, Singapore)

Was Sim’s action truly one of commiseration or were there more opportunistic motives?

Its interesting to note back in 2001, when Apple launched its very first iPod, Creative Technologies was already in the market with their own mp3 player, the Zen. In fact, in Job’s introductory keynote of the iPod, he listed Creative as one of the players in the existing portable audio device market.

A decade on, Apple is now one of the biggest brands in the world, while Creative remains a name only those well-versed in gadgets and technology would be familiar with.

Marketingmag.com.au spoke to Dave Bullard, editor-in-chief of Macworld Australia (also published by Niche Media) to find out the history between these two brands.

“Creative was a pioneer in the world of mp3 players, and has constantly been a leader of the second tier of the market – that is, everything but iPod,” says Bullard.

“When the first iPod appeared in 2001, it had a 5GB hard drive while Creative had a 20GB model available. But the iPod had a sexy design and the innovative click-wheel interface, which literally blew Creative out of the water.

“Creative responded with the Zen branding and a better interface – the Zen also had replaceable batteries and FireWire connectivity, which the iPod didn’t – but it was too late to stop the Apple juggernaut.”

In 2006, Creative sued Apple for ‘borrowing’ Creative’s user interface design, and within three months, Apple had to pay USD$100 million in licence fees for the Zen patent.

However, Bullard believes that it was Apple’s ability to create a seamless integration between hardware and software that helped the company dominate the mp3 market.

“What Apple did to put itself so far ahead of the market was to stop treating mp3 players as external drives that you dragged-and-dropped music and video on to. Instead, it introduced iTunes, which gave users a super-simple way to store their media and manage their players. In short, it treated the software and hardware as a single unit.

“Then it went a step further by introducing the iTunes Music Store, which completed the circle by giving users somewhere to buy music without leaving the iPod ecosystem. No other maker of MP3 players – including Creative – was prepared to do this, and they lost the race.’

Bullard, however, believes that Sim’s decision to take out the ad in memory of Jobs was done with honourable intentions.

“After the legal action of 2006, Creative took an ‘if you can’t beat ’em, join ’em’ attitude and started working with Apple in the Made for iPod program, and has made some excellent peripherals for Macs, iPods, iPhones and iPads over the years,” notes Bullard.

Previous Article
Digital is changing the way Aussies love their sport
Next Article
Mobile speeds up; marketers must follow