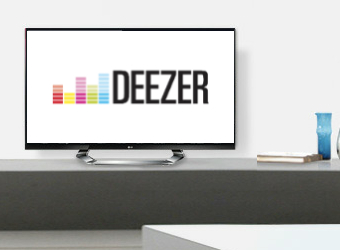 As the online music streaming space becomes ever more populated – Spotify, Rdio, Guvera, Vevo, Mog, Pandora are all among the players to service Australia – French outfit Deezer has announced international partnerships to invade the living room on smart TV sets.

Deezer was founded in 2007, one year after Spotify, and has just announced news of an international partnerships with big-name TV manufacturers LG and Toshiba. Deezer will now not only expand globally, but win itself a further user base through the two consumer technology giants.

Deezer’s international expansion is reported to have been faster than any other digital music service, being available in more than 182 countries and in every continent in the world, it claims.

And this latest move to zero in on (and stream through) the growing numbers of smart TVs identifies a unique opportunity for the brand. In the last year alone, around 43 million smart TVs were sold worldwide, and it is predicted that this number will rise to 95 million by 2016, reports NPD DisplaySearch.

Axel Dauchez, CEO of Deezer, explains his company’s vision: “We believe that putting Deezer at the heart of the TV experience marks the next innovation for music. For many of us, the living room is the heart of the home, and we want Deezer to be a part of that.”

Breaking down new barriers and creating a listening experience that’s ‘anywhere on any device’ is the goal for Deezer.

Richard Choi, senior vice president of the Smart Business Centre at LG Electronics, adds: “LG was the first company to integrate Deezer – a service already available for PCs, tablets and smartphones – in its smart TV line-up.”