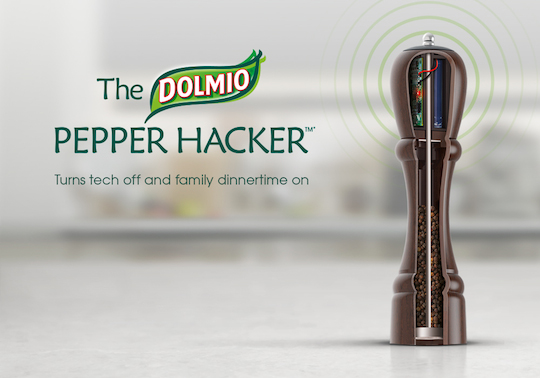 Correction 25 August 2016: The announcement from Dolmio’s PR agency, and this article, initially said 5000 Pepper Hackers would be produced. It has now corrected that to 3500.

Dolmio is producing 3500 Pepper-Hackers that shut down electronic devices during meal times.

When pasta sauce brand Dolmio unveiled the concept of the ‘Pepper-Hacker’ – a pepper cracker that cracks pepper and shuts down TVs, WiFi and mobile devices – it did so only days before 1 April 2015, leading many to assume it was a prank. But prank or not, it’s now producing 3500 of the devices to give away in its latest promotion.

With 100 million views across Facebook and Youtube, the film launched in March last year sparked world-wide conversation around the problem of technology disrupting family meal times. Soon after the film was released, Dolmio says it was inundated with a flood of requests from frustrated parents to make the Pepper Hacker available for real.

“We listened to our customers, and decided that we simply had to create the Pepper-Hacker en masse,” says Tim Hicks, marketing director at Mars Food Australia. “Sitting around a table and connecting over food is one of the most beneficial times of the day, helping families catch-up, have fun, and really connect. The Pepper Hacker reminds us of the influence technology has over us and how we can all benefit from a little down time from it”.

Around 3500 fully-functioning Pepper Hackers are being produced for consumers to get their hands on as part of a national on-pack giveaway. Each Pepper Hacker will be covertly disguised in unassuming packaging before making its way to the tables of lucky winners.

Dolmio partnered with Clemenger BBDO Sydney to develop custom software and hardware to house the Wi-Fi-disabling technology within a functioning pepper grinder. By connecting to a home Wi-Fi network, one click of the Dolmio Pepper Hacker can disable the internet connection of up to four unsuspecting family members for 30 minutes, which, according to Dolmio, is the perfect amount of time to connect over a shared spaghetti bolognese.

“It seemed the whole of Australia (and half the world) wanted a Pepper Hacker of their own after they saw the film last year,” says Paul Nagy, executive creative director at Clemenger BBDO Sydney. “To see them coming to life this year at scale is something we’re very proud of indeed.”

Clemenger BBDO Sydney partnered with AMV BBDO London to create the campaign’s online film, a social experiment that proves just how distracting technology is when it comes to meal times. Directed by Paul Middleditch of Plaza Films, Dolmio secretly filmed tech-distracted family members and changed elements of the world around them without them noticing, proving just how much they miss out on when they have their faces buried in their phones and tablets.