The figures, from eBay’s Online Business Index, compares favourably to the growth experienced by domestic and international online retailers, which according to NAB’s Online Retail Index achieved 25% and 40% revenue growth respectively last year.

eBay reports that 3000 of its sellers, including fashion label Supré, niche product retailer OZhut and clothing business Alibionline, increased staff by 20% on the previous year, and almost 160 Australian businesses topped $1 million in sales for the year.

Vice president of eBay, Deborah Sharkey, says eBay retailers were now looking to mobile to drive their sales forward, with seven out of 10 (72%) top 3000 eBay sellers claiming mobile commerce will play an important role in their 2012 business strategy.

“Retailers on eBay were some of the first to recognise the growth opportunities of online retail and have continued to innovate, adapt and integrate multi-channel business models to stay ahead of their competitors,” Ms Sharkey says.

“In 2012, ecommerce and increasingly mobile commerce will continue to drive retail growth. There is great opportunity for Australian businesses to invest in innovative mobile solutions to reach the new mobile consumer.”

Supré is one brand which has already established a mobile-friendly shopping site. Catherine Taouk, international brand manager for Supré says the retailer established its mobile commerce site after seeing a spike in transactions from mobile devices.

Taouk says, “Consumers now expect to be able to access their brands no matter where they are, whether it is in-store, online or via their mobiles. In the last 18 months, 15% of our online transactions have come from mobile phones or tablets and we expect this trend to continue.”

However, the research revealed that while Australian businesses are keen to tap into mobile commerce, they are handicapped by a lack of knowledge and infrastructure to effectively reach mobile consumers.

Almost one in five (17%) of eBay’s top 3000 said they don’t know how they’ll invest in mobile commerce while 40% said they lack the knowledge to make informed mobile investments.

Slow mobile internet speeds, unreliable coverage and the high cost of mobile internet access were elected as major barriers to growing mobile commerce business by around one in four of the respondents.

But most are making plans to invest in mobile infrastructure this year. Nearly half (46%) plan to optimise online content for mobile, 24% said they would develop a mobile website and 21% plan to develop a mobile app. For three in five of the sellers, 2012 will be the first year their business invests in mobile commerce.

Executive director of the Australian Retailers Association, Russell Zimmmerman, warns retailers that simply adding a mobile or online presence is not enough and that retailers must ensure cohesion if they venture into multiple platforms.

“Good retailers are innovating towards offering a multi-channel shopping experience to their new and existing customers,” Zimmerman says. “While having a presence in the ecommerce and mobile market is a growth opportunity in itself, it’s also a necessity to ensure the shopping experience is seamless and integrated across the many channels Australians are now conducting their business.”

Despite clocking impressive growth, the sellers involved in the study encountered their share of challengers in 2011. Going forward, the retailers foresee pressure from manufacturers and suppliers as a challenger, with one-third (34%) of respondents reporting some suppliers tried to prevent them from selling products online. Three in five also believe international competition will continue to pose a threat, while 56% rate the state of the global economy and 55% rate postage costs as the biggest challenges that will impact on their growth. 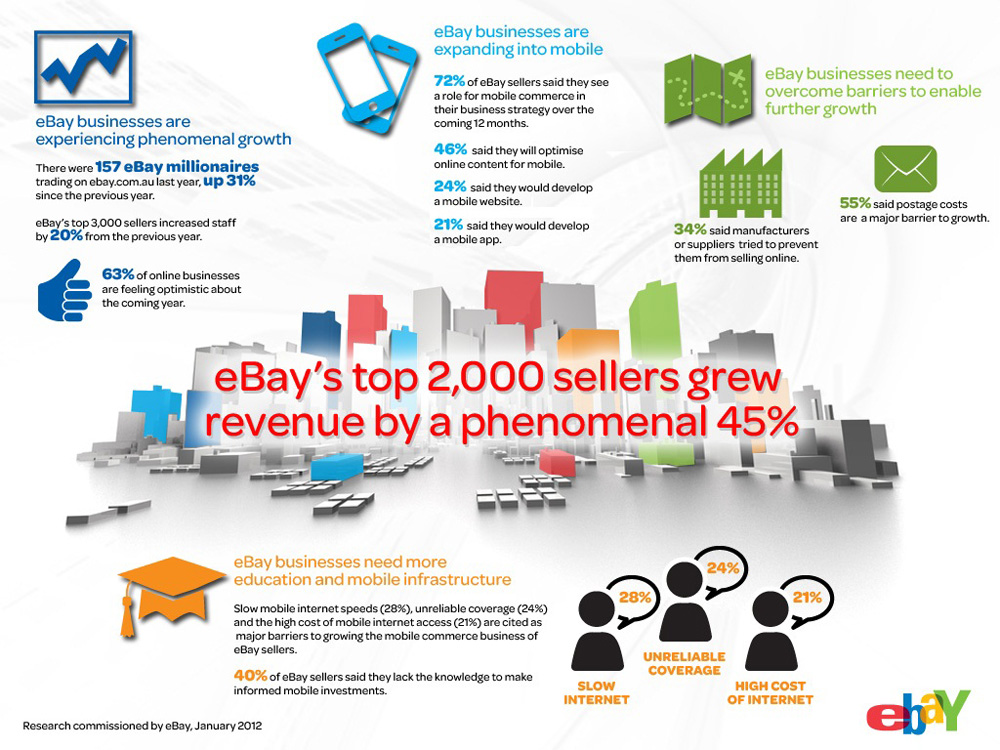 Tags:
Previous Article
JWT: Your mobile will do everything sooner than you think
Next Article
Internet a ‘shot in the arm’ for media, revenue to grow 17%