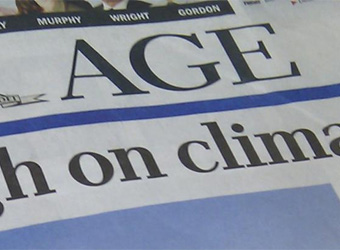 Former Age journalist and paperboy, and current editor of Christchurch’s The Press, Andrew Holden, has been appointed the new editor-in-chief of The Age and The Sunday Age, while Steve Foley has been named news director of Melbourne.

Fairfax announced yesterday that current editor Paul Ramadge would be leaving the business as his current position no longer existed under the new management structure. Holden will assume the role of the same name and on the same mastheads, but will be the first editor-in-chief to sit across both print and digital editions.

Editorial director of Fairfax Metro Media, Garry Linnell, called Holden, who grew up in Melbourne, an engaging and intelligent journalist who will champion Melbourne and continue the masthead’s long-running and trusted relationship with the people of Victoria. Linnell praised Holden’s guidance of The Press through Christchurch’s earthquake: “Andrew’s leadership during the earthquake attracted world-wide notice and acclaim. It wasn’t just the exemplary manner in which he guided and cared for his staff at a time of crisis – it was also the way he led the Christchurch community, informing them of the situation and keeping a cool, calm voice when others might have trembled.”

Holden has worked on a range of suburban papers in Melbourne and spent seven-and-a-half years with The Sunday Age and The Age, which included responsibility for editorial production for all Fairfax papers during the 2000 Olympics in Sydney. He was part of the team that won a Walkley Award for Best Graphics, produced as part of the Olympics coverage.

Holden said, “I’m really excited about returning to The Age. Its journalism has long been the best in Victoria, and as the current PANPA Newspaper of the Year for the largest circulation category, it is also the leading newsroom in Australia.

“There are many challenges facing our industry, but the fact that The Age has such depth of quality means it will be able to deliver the journalism its readers expect, regardless whether that is online, in print or through phones and tablets.”

Holden’s first taste of media was as a paperboy while growing up in Melbourne. He returns to the city after 12 years in New Zealand.

All other current positions, titles and newsroom functions remain in place.