How Apollo 11 immortalised the Omega brand

How Apollo 11 immortalised the Omega brand 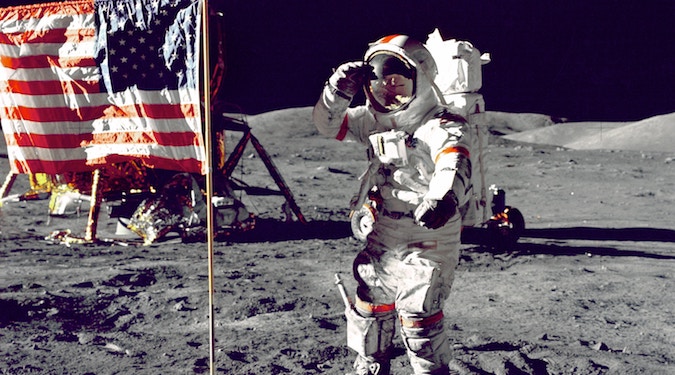 This year the world celebrates the 50th anniversary of what may be humanity’s greatest achievement: sending a man to walk on the moon. On that journey and the lunar expeditions that followed, one corporate brand claimed a unique association that it has nurtured to success ever since. By Con Stavros.

Watches evolved over centuries from clocks to become jewellery of the nobility. Readily available as devices worn on the wrist for more than 100 years, the evolution of Japanese quartz models in the 1960s turned the mechanical watchmaking industry of Europe on its head.

The Swiss, leaders in the market, feared being subsumed by these cheap and accurate wristwatches. In response they embarked on a marketing masterstroke: joining the party and embracing the threat, rather than rebelling against it. The superbly named Swatch brand championed fashion and affordability and flourished globally, meeting the challenge head on and upping the ante with European chic and style. This clever Swiss counter elevated its traditional mechanical brands to an even more elite form of aspirational luxury, where authentic heritage was an unmatchable advantage.

The Swatch Group is now a conglomerate that encompasses a range of leading brands, including Longines and Blancpain. The brightest star in the portfolio however is arguably Omega, whose strategy since being founded in 1848 is testimony to the lesson that successful branding is an extraordinary process of investment.

Omega understands that in modern times we rarely need a watch. Time is all around us. The wristwatch, however, serves a greater purpose. Its practicality of measuring a point in the rotation of the Earth is also connected to a visible expression of how we see ourselves and the passage of our lives. Branding is not just what you do to the product, it’s what you do to the mind of the consumer.

Omega is famous for a range of activities that stimulate consumers to accept it as exceptional: long-term celebrity endorsements, James Bond product placements, Olympic Games ‘official timekeeper’ status since 1932 and other sporting engagements that reflect precision and cutting-edge development. Its most famous connection, however, is the enduring and priceless link to NASA.

The Omega Speedmaster was adopted as the first flight-qualified wristwatch of the space program. Since 1965 it has travelled with astronauts to space and the surface of the moon. The brand’s Speedmaster Professional is known to many as the ‘Moonwatch.’ The back of each carries an engraving noting its suitability for manned space travel, a claim Omega earned through an investment in quality – not marketing – years before the moon landing, as NASA sought a high-quality timepiece that could withstand the rigours of space travel and training.

The Speedmaster was reportedly the only watch tested by NASA that survived all its rugged experiments. It gave the brand the ability to leverage the most significant technical achievement of the past century in a way that keeps it relevant, despite the emergence of smart watches and devices that, on a practical level, offer much more.

That luxury watches endure is an incredible act of brand management that defies rationality, given spending what can be tens of thousands of dollars on a device that offers little beyond an aesthetic is clearly an emotional decision. The luxury watch industry, including Omega, has adapted its marketing extremely well. Such watches, more generally, are now an ‘investment’, safeguarded for one generation to pass on to the next and an expression of style for anyone serious about their image.

As luxury watch prices rise, demand remains high for brands that manage the concept of aspiration carefully and encourage collectors with exclusive editions. The advertising of luxury watches remains remarkably formulaic, yet somehow reassuringly appropriate. Here too Omega excels with its Speedmaster advertisement of President John F Kennedy and his famous quote “We choose to go to the moon” – an iconic piece of marketing history that intertwines the desirability of the luxury watch with the practicality of human endeavour in a way that is truly out of this world.