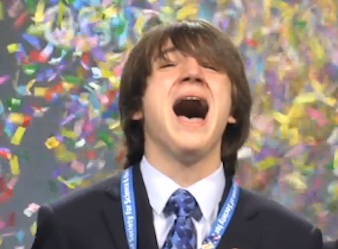 Intel has recruited teenager Jack Andraka, a teenage boy from the US who discovered an early detection test for pancreatic cancer at age 15,  in their latest TV spot. The inspiring commercial uses footage of Andraka receiving the International Science and Engineering Fair grand prize (of $75,000) for his work.

So what does a computer tech company have to do with a teenager fighting to cure pancreatic cancer? Intel are the major sponsor of the International Science and Engineering Fair for one, but the story of how Andraka came to find his medical invention is so inspiring it could really be leveraged and used to promote an array of brands trying to promote innovation.

The spot features Andraka’s journey in reverse chronology order, after his uncle died from the disease, Andraka asked 200 researchers and other experts for help. Only one, a doctor of oncology at Johns Hopkins, provided him with lab space to use after school and by the age of 15 he succeeded in developing a test that is 168 times faster, 400 times more sensitive, and 26,000 times less expensive than the medical standard.