Love or Hate it two: Domino’s does good, whether you care or not

Love or Hate it two: Domino’s does good, whether you care or not 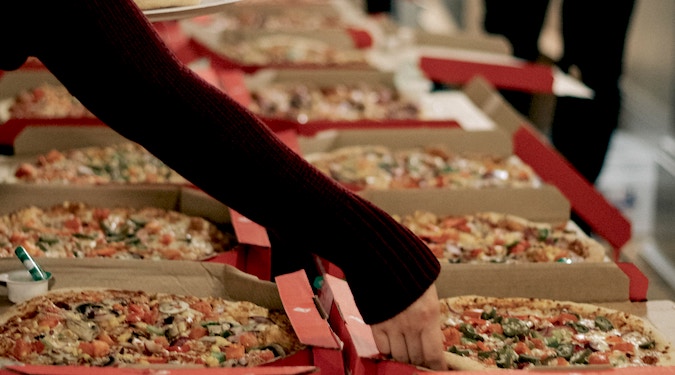 “But imagine a world where every corporate is active in this space. Then it’s not special.” Domino’s chief procurement officer tells Marketing about the pizza company’s commitment to doing good – whether people hear about it or not.

Brand purpose is currently the source of many debates across the table at brands and agencies – and in pretty much no pubs, buses or child-care centres (ever). Tired of the circular, cynical conversation about it online, we left the bubble this month to go a little deeper.

For this four-part series we’ll be speaking to four people in diverse roles that intersect marketing – a chief procurement officer for a global fast food chain, a chief customer officer, a 2018 Agency of the Year founder and perhaps the only chief purpose officer in Australia.

We wanted to ask them: What is Purpose? Does it matter? Should we keep it to ourselves or run from the meeting room and hide under our desks?

Last week we spoke with Catherine Anderson of Powershop. The energy company’s work in leaving a better planet for future generations is part of its everyday and ‘not a poster series on the wall’. It’s baked in (using green power of course).

John Harney, who we speak with today, is chief procurement officer at Domino’s and sees brand purpose in a similar way. While helping the brand to deliver on its purpose is part of his role, Harney sees it as just ‘getting on with good business’.

Warren Davies: What do you believe purpose is, in a brand and business context?

John Harney: For us, building what we call ‘Give for good’ – our philanthropic activity – we weave it through the business and the brand. In our case, for a retail brand, and making pizza, you can get tied up in ‘what is your mission statement’ and so on but we’ve always been active in this space, and very generous.

It dawned on us [that] we can be more organised and express our purpose to our people. We weren’t so interested in wrapping our brand around this purpose, but really wrapping our people around what we’re trying to achieve. We believe people do want to be proud of the place they work, and it does drive efficiencies and productivity. We also wanted to stand for something more than just pizza.

We’re in 700 locations around Australia; effectively 700 small businesses out there in 700 communities. So having a focus on community and giving back made perfect sense (– Give for good, Domino’s Australia’s philanthropic program, began in 2016 to support local communities).

Where did this drive to give back come from?

With 700 small businesses comes an opportunity to integrate into communities right across Australia but it also meant our approach to giving previously was extremely fragmented and ad hoc. We knew we needed a much more streamlined approach. In order for our people to believe in it and buy into it we also knew it had to [involve] areas we were passionate about. It’s not top down, it’s not shareholder-driven – though that is becoming a thing now. I think we’ve arrived there with the right people with the right mindset.

What is the aim of Give for good?

We’re about building capacity. You’ll remember the old saying ‘teach a man to fish…’? We do do the ‘day after’ stuff such as flood relief and helping out, but mostly it’s about real structural change and making a real difference. Our official purpose or mission is to be ‘the leader of the internet of food in every neighbourhood’. And we are in every neighbourhood. In terms of philanthropy it’s about creating real change in the areas of youth and education, disaster relief and preparedness, regional communities and leadership and entrepreneurialism.

What have been some of the outcomes for Domino’s and communities?

Thirty two percent of people at Domino’s in Australia contribute to the program, that’s not too shabby after two years in operation. And that’s matched by Domino’s dollar for dollar. We also have something I’m very proud of, what’s called ‘the round up tool’. You can round up your purchase to the nearest dollar and donate that small change to charity. You might say, ‘okay that’s just cents’, but on average 50,000 Australians a week round up. I honestly think that’s one of the most powerful things we’ve ever built.

For all the work with our digital capabilities and removing consumer friction, we’ve actually made it really easy to give, and do so anonymously. Wherever I go I like to talk about that. If every online retailer in Australia did that there would be billions flowing to the right places.

We have another program where we bring in 30 year nine students that may not have many fully-employed role models in their life. They may not have any idea of what to do at the end of school, let alone how to get from year nine to uni and work. We bring in people from across our business and talk about what they do and how they got to where they are today. It gives the kids a sense of how they can find these roles. People from all over the organisation get involved – IT, chefs, accountants – all of us. And they all give a talk or just have a chat and have lunch with them. It’s chaos as you can imagine – 30 kids – but it’s great.

It’s not easy when you have 15,000 people out there across 700 stores. Half of them under the age of 20 and many of them working just a few hours a week. It can be hard to engage them. We’ve set up an internal process for stores to identify a local charity they want to support and apply for a grant. And we have allocated funds to support those activities. There’s myriad ways we help.

Do you think it impacts perceptions of Domino’s with customers?

I think it does. I hope so! We don’t do it for that reason, to be honest. We don’t measure it and I don’t know how you would. Our measure is: if we have an engaged workforce and they are engaging with the community, that’s probably success. You know, the measure of doing good is that you do it when nobody is looking. Not ‘do good and then shout it from the rooftops’. But I have had people say, ‘John you need to talk more about this because we need more corporates doing this’. So it’s a challenge.

We had the recent floods up in Townsville and we helped to feed emergency services across the town – about two or three thousand pizzas – and we don’t do that so people will share it and post pictures about it; but if they do, that’s great. But that assumes we haven’t been knocked over by the floods also. We hope not.

What do you say to the people who are cynical about brands with purpose and talking about this?

It’s tricky isn’t it. I think we do need to talk about it more. I think more corporates need to be working in this space. I think if you asked somebody who received some help they wouldn’t think it was cynical. They’re probably very thankful for a hot meal and a helping hand during a difficult time. Would we stop because someone thought we were acting from an ulterior motive? No.

If you can’t demonstrate real social good from what you do then people do have a right to question it. We’re always happy to introduce people to those we work with and be transparent about it. I think if you’re changing lives you probably can talk about it. To be honest we’ve not had anybody say ‘you’re doing the wrong thing’.