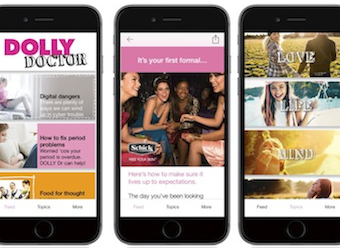 The Seven Network led the primetime free-to-air TV rankings in 2014, taking a 30.1% share of the five-city metro market, according to OzTam data.

The AFL grand final (Seven) and winner announcement episodes of My Kitchen Rules (Seven) and The Block Glasshouse (Nine) topped the list of most-watched programs across the five-city metro market for the year, among all viewers between 2pm and 2am.

1.1 million Australians tuned into the ABC’s coverage of the AFC Asian Cup opening match between Australia and Kuwait.

The network broadcast the soccer match at 10pm on ABC TV and ABC iView, as well as live on ABC radio supported by a live blog on ABC Online.

Michelle Bridges’ 12WBT program has teamed up with Spotify to launch an ‘intelligent’ running playlist generator for subscribers to the ad-free service.

The two-month campaign centres around a Spotify widget, which pulls together a custom playlist after asking the user a series of questions, including location, favourite running song and distance and intensity of the run.

It runs promotional spots for 12WBT running programs between songs.

12WBT marketing director Kieron Wogan says: “This playlist and running route generator was the perfect way to complement 12WBT’s broad range of running programs. It will not only be a great companion for those already in our programs, but it will also introduce our running offering to a new audience before our 2 February round kicks off.”

Coville will focus on leading and growing the company’s WA client portfolio across its TV and radio assets, including Footy WA.

“Mobile remains one of the fastest growing media platforms and a key part of any marketing strategy that is trying to connect a brand with the passions of today’s teenagers. The Dolly Doctor app provides advertisers with yet another channel to target this elusive demographic, backed by Bauer Media’s trusted and curated content.”

Jan Koum, CEO and co-founder of mobile instant messaging service WhatsApp, has announced that the social platform has reached 700 million users each month, with 30 billion messages being sent every day.

Although WhatsApp may not be huge here in Australia just yet, these figures tell us it will be a social network to watch.

Previous Article
Three-quarters of ad campaigns in 2014 failed to deliver results
Next Article
Seven trends for 2015: The year of interactive experiences GRANT FLANNERY