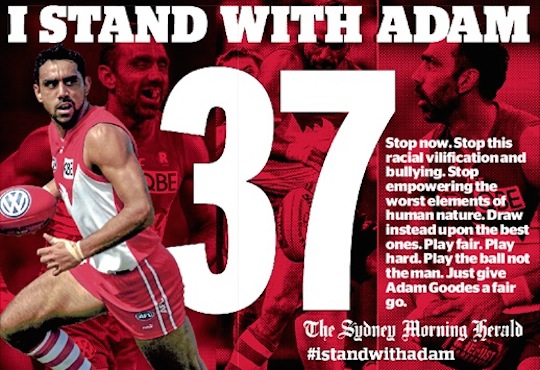 The Age and the Sydney Morning Herald wrapped their Saturday editions (1 August) with a poster (pictured) calling for readers to support Adam Goodes and join the campaign #istandwithadam.

Readers are encouraged to exhibit the poster, take it to football games this weekend, and post photos of themselves with it using the hashtag #istandwithadam.

Darren Goodsir, editor in chief of the Sydney Morning Herald, said the controversy over the booing of the Sydney Swans star and former Australian of the Year had divided the nation. “The Herald calls on readers to take a stand and make it stop.”

Editor in chief of The Age, Andrew Holden, says, “We have taken this unusual step because we believe that racism is inherent in the abuse that Goodes has suffered and we all have a duty to help end this travesty.”

Channel Seven is taking rival Nine to court, claiming that cooking show The Hot Plate is a copy of My Kitchen Rules.

The Herald Sun is reporting that Seven has submitted Federal Court papers asking for The Hot Plate to be taken off air.

If you haven’t seen Hot Plate, it’s like MKR but with a lower budget and even more unlikeable contestants. The main difference is they’re all existing restaurant owners, whereas on MKR contestants must be amateurs. (Although that difference should in no way be taken to mean that the pro group is better at cooking, taking criticism or general self-awareness.)

Seven’s claiming that Hot Plate has blatantly copied several things, listed below. The comments after the colons below are Marketing’s take on each point, very much intended for entertainment purposes only because we’ve seen almost several minutes of each show, this story feels like a joke and we’re certainly not Federal Court judges:

CollegeHumor branches outside US for first time

Turner International is launching a local version and sales team for its CollegeHumor website, a low-brow humour destination for male 18-34s.

CollegeHumor Australia will offer localised editorial content developed from an Australian perspective, in addition to existing CollegeHumor content created by the US-based editorial team, so expect to see some Neighbours in the next version of ’18 Mesmerizing GIFs Made From Your Favorite Movies & TV Shows’.

This is the first time CollegeHumor content will be created locally for a market outside of the United States, and Australian film critic, entertainment journalist, producer and television personality Giles Hardie has been appointed as managing editor.

Authentic Entertainment has been appointed to manage the commercial operation in Australia.

A joint venture between Fairfax Media and Mi9, APEX offers premium mobile inventory that comprises mobile properties owned and operated by Fairfax and Mi9, in addition to third-party publishers such as Daily Mail Australia. Other publishers will be invited to join in the future.

The mobile advertising inventory delivered by APEX is powered by AppNexus.

The first issue of the new quarterly will be on sale in October, and it will be available in both print and an enhanced, interactive digital edition.

The new-look magazine has its own editorial team and a unique editorial format: a mix of extended features focusing on themed recipes and on-trend ingredients, as well as smaller bite-sized features with quick recipes, how-tos and tips.

The existing bimonthly Donna Hay Magazine has a total masthead audit of 93,684 sales per month.

Facebook is reporting Q2 2015 revenue totalling $4.04 billion, including revenue from advertising of $3.83 billion.

MPA says magazine ROI has been underestimated in the past

A study conducted by Millward Brown on behalf of the Magazine Publishers of Australia’s (MPA) has concluded that many econometric models systematically underestimated the impact of magazine advertising on sales. This does not reflect the readership patterns and causes underestimation of magazine’s impact on sales.

Millward Brown’s director of marketing science, Abhishek Shukla, says that having industry-accepted magazine input data creates a level playing field for measuring how each channel in the media mix stacks up.

“While traditionally we’ve used combinations of inputs to try to better represent magazine’s readership and its impact on sales, we have never before had industry accepted, historical weekly data reflecting readership accumulation patterns for the delivery of magazine campaign audiences,” Shukla says.

The interactive content charts 24 hours in the lives of five unsung Australian technology innovators, profiling the Australian ‘makers’ behind major advances in the fields of healthcare, aviation, astronautics, geophysics and mining.

The interactive storytelling is sponsored by GE (labelled ‘brought to you by GE’), including an amalgam of written articles, videos, data visualisations and still images.

‘Innovation Never Sleeps’ was booked through MEC Sydney to run online for three months, and is the second series of its kind from Guardian Australia and GE.

Since its launch in 2013, Guardian Australia has worked with brands such as NRMA Insurance, and won a Walkley Award for multimedia storytelling for (not-sponsored) Firestorm, an interactive piece about the January 2013 bushfire in Dunalley, Tasmania.