Mercedes-Benz Vans has invited contestants to pitch an innovative business surrounding its new Vito van in its ‘Hack My Van’ competition campaign.

Mercedes-Benz Vans has invited small businesses, start-ups, teams of developers, designers and creatives to assemble teams of like-minded entrepreneurial thinkers and pitch business ideas which use the Vito van as the canvas.

Six two-to-three person teams of entrants will be selected in the ‘Hack My Van’ event, and the winning team will win one of the new Vito vans.

The six teams are to compete in a one-day ‘hackathon’ where their creativity is put to the test via a series of competitive exercises, working alongside a team from Mercedes-Benz Vans, product experts and industrial designers to bring their idea to life – redesigning a Vito van in an innovative and creative way. 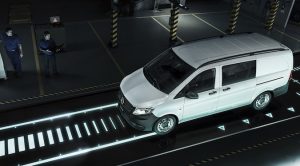 “We believe that the humble Vito has long been underestimated and has simply been used to get a job done. When we see a van however, we see something different. We see the potential inside. We are excited by the ideas and possibilities for how the Vito van can be reimagined to transform an existing business, or completely reinvented to create new businesses,” Diane Tarr says.

Purchase a subscription to Marketing for the latest insight, analysis and case studies on Australian brands and campaigns.