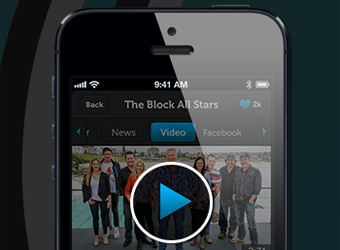 Nine’s social TV app, Jump-in, will let viewers of The Block All Stars take virtual tours of the houses renovated on the show and highlight products in the rooms, when it launches in full for tonight’s premiere of the show.

Mi9 today unveiled a suite of tailored brand and consumer opportunities to engage with television audiences via the app, which will operate across iPhone, iPad and Windows 8 devices.

As The Block unfolds viewers will be able to access 360-degree room tours and room reveals, news, catch-up episodes and additional video content, as well as enter competitions and vote for and comment on their favourite rooms.

“Jump-in goes beyond social interactivity and provides TV viewers with more,” Matt James, managing director of Mi9 Media, says. “People want bigger viewing experiences and to get inside their favourite shows, connecting with the stars and getting all those extra bits of information to give them one-up on their mates and other viewers.”

“This, in turn, will provide a strong platform for brands to connect with highly passionate, loyal and engaged TV fans to drive deeper consumer relationships across multiple devices.”

Sponsors of The Block – iSelect, iiNet and Suzuki – will participate in sponsored features, branded content and tap-and-touch panels to launch branded content.

iSelect has sponsored the ‘Viewer’s Choice Poll’ feature where viewers are invited to vote on their best room to win a chance to appear on the finale of the show and $25,000 off their mortgage.

iiNet is the sponsor behind the app’s 360 degree room tours, which feature hot spots highlighting products within each room and a daily quiz for the opportunity to win a technology related prize.

A ‘Drives the Block’ display panel, specially created for Suzuki, links through to video and content from the auto maker.

Jump-in will be available for all Nine’s top tier shows this year, along with selected Go and Gem programs. Five new shows are expected to be added to the app each week.

Consumer awareness and engagement with Jump-in will be driven by a range of marketing and promotional activities during 2013 which will deliver ‘bigger experiences’ to dedicated TV fans through the app. The Jump-in ‘button’ will appear regularly during Channel Nine broadcasts.

The first phase of Jump-in launched for iPad as a trial during the 2012 Olympics coverage on Nine.