Miranda Kerr is the most ‘Binged’ Australian celebrity of 2013

Miranda Kerr is the most ‘Binged’ Australian celebrity of 2013 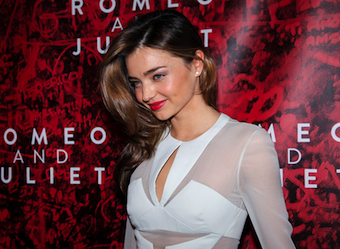 We’re still not convinced at the prospect of ‘Bing’ becoming a verb and although it still hasn’t found its way into mainstream vocabulary, that hasn’t stopped search engine Bing from releasing their global ‘most Binged’ list today.

Supermodel Miranda Kerr has topped the most Binged Australian celebrity category for the third year in a row, ahead of Kevin Rudd, Tony Abbot, and Julia Gillard who all appeared in the top five thanks to this years federal election.

Surprisingly, or not, Miley Cyrus managed to influence several Australian categories: She was the top searched person in Australia, and ‘Twerking’ was the second most searched word, only losing out to ‘lol’. Her song Wrecking Ball landed a top five spot in the most searched songs category (Robin Thicke’s controversial song Blurred Lines took out number one), and ‘Miley Cyrus Twerking’ was the fourth most searched news story of 2013, narrowly beating the Spanish train disaster.

When it comes to finding love online, dating application Plenty of Fish swam into the number one spot, and addictive app Tinder has swiped a top five spot, despite only being launched in Australia in June.

The Royal baby captured Australia’s hearts (and our keyboards) this year, as the most searched news story, and results of the top sporting teams will disappoint NRL fans as AFL teams filled the top three searched spots.

Below is a more detailed look of the Australia results for 2013: