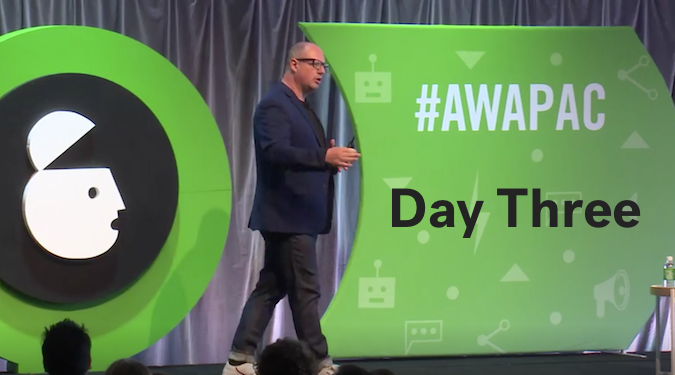 This week Advertising Week returned to Sydney for the second year running, with some of the industry’s most distinguished marketers and advertisers taking to the stage to discuss trends, the state of marketing and what the future stands to hold (and whether it’s worth looking forward at all).

Key themes over the week were privacy, trust, technology and connection. It became evident that in the bustle of it all, most marketers are too busy with their heads down, buried in their own brands, to pick up on larger trends and carve out their own take on the industry’s trajectory. Advertising Week APAC, therefore, was a welcome opportunity for the marketing community to come up for air and take stock.

With close to 150 individual panels, keynotes and fireside chats, even those in attendance suffered from some degree of FOMO. To quell that, here’s Marketing’s key highlights from day three of Advertising Week APAC.

Mel Silvia, who was made Google’s ANZ managing director and vice president in October of last year, kicked off day three’s breakout panels with a focus on privacy in a new digital era.

Her keynote, ‘Consumer needs in a privacy-first future’, largely focused on Google’s own efforts to democratise and expand privacy controls for its users, but also delivered takeaways for marketers to consider.

According to Silvia, Google search is often where people go to ask revealing questions they would otherwise reserve for only their inner circles – questions of personal and mental health, of controversial or contrarian opinion. “We have a responsibility to lead in this space,” said Silvia.

“Privacy is not a luxury product,” said Silvia. She affirmed that Google’s stance toward privacy is very much that it should be afforded to all netizens, and not hidden behind a premium offering.

According to Silvia, the “burden” of privacy and protection should not be on the consumer. Commenting on the ACCC’s Digital Platforms Inquiry, she said, “We really have welcomed the opportunity to be part of that inquiry… It’s an opportunity to build a real and genuine trust with consumers.”

McDonald’s and DDB on the long haul

Later in the afternoon, Leif Stromnes, MD, strategy and innovation at DDB, sat down with director of marketing at McDonald’s, Jo Feeney, to talk about the agency and client relationship, which has lasted for 48 years.

The first tip was to avoid ‘the C word’ – client, that is. “We like to think of ourselves as one team,” said Feeney.

The fireside chat titled ‘How to have a 45+ year relationship in Adland’, moderated by corporate communications manager Lindsay Bennett, saw the agency and brand bosses discuss not only the secret to their relationship’s health, but how they’ve overcome differences in the past.

“Of course there are things we don’t agree on,” said Feeney. Feeney explained that reaching a decision between the parties has largely been a case of having to “put aside egos and opinions.”

“Jo (Feeney) is legendary about music,” laughed Stromnes. According to the DDB boss, Feeney’s obsession with finding “the perfect music” has been the source of some friction in the past.

Feeney continued to explain that honesty and trust were the foundations to McDonald’s and DDB’s long relationship, even when it came to disagreements. “Just tell us if you don’t like it. Don’t just smile and walk out.”

The two also shared their favourite pieces of work over the years. Feeney’s was an older one, ‘Dad and Daughter’ – a touching short of a father trying to get his breakfast through McDonald’s drive-through while keeping his baby daughter asleep in the backseat.

The agony of merger

The cohort discussed whether mergers – particularly in ad land – are always takeovers. For Halligan and Aldington, their experience seemed to indicate that more often than not, mergers are indeed takeovers in disguise. Paul Sigaloff, who was involved in the Verizon’s US$4.48 (AU$6.58) billion acquisition of Yahoo!, said he had been part of several merger proceedings. Sigaloff seemed to think a merger, if performed correctly, could result in a company maintaining elements of its partial component organisations.

Though it’s worth mentioning that a merger is no fun task. “It can be very messy” said Vogel. According to the panel, 70-90% of mergers fail, and often it can be because of the little things.

Aldington remembers asking staff for feedback during Host and Havas’ merger under the Havas Group, expecting difficult questions, she was instead met with more trivial ones – ‘are we still doing wine hour on Friday?’

The consensus on the panel was that minutiae is often the most overlooked difficulty of merging two companies – maternity leave, changing notice periods, shifts in culture. According to the panel, the “baggage” associated with a merger can strike fear into the hearts of agencies and clients.

It’s been known to be the cause of mass client exodus, and has driven employees away. And yet new mergers are announced every second week, so it must be worth it.

Disclaimer: Marketing is proud to be a media partner of Advertising Week APAC