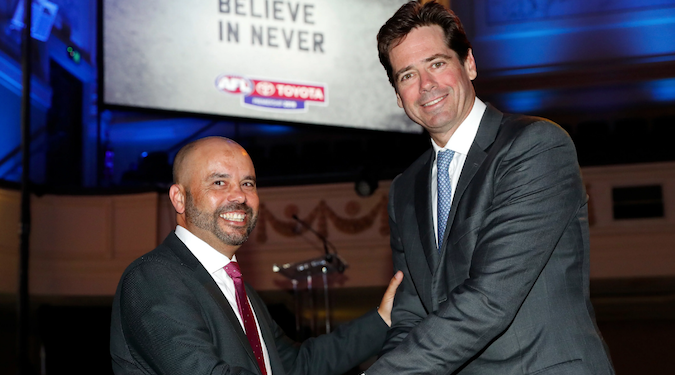 The AFL has renewed its sponsorship deal with Toyota, extending its current relationship to 20 seasons with a record-breaking $74 million four-year contract.

The deal is being touted as the biggest sports sponsorship arrangement in Australian corporate history – spanning four years at $18.5 million per year.

As part of the sponsorship Toyota will become the AFL’s official community partner, which includes the Toyota Good for Footy program. Additionally, Toyota will be named as the AFLW’s official automotive partner.

“Our partnership started in 2004 and over that time the contribution Toyota has made to footy, not only in the AFL, but at a community level is nothing short of amazing,” says AFL CEO Gillon McLachlan.

The deal was announced by McLachlan and Toyota Australia CMO Wayne Gabriel the AFL’s 2019 season launch at the Melbourne Town Hall last week.

Gabriel says the new agreement will help foster continued development of the game from local to elite competition levels, “Toyota Australia, and our network of 279 dealers across Australia, is proud to be a continuing part of the AFL family.”

“Through this partnership, we are committed to growing this great game on both a national and grassroots level to help footy players regardless of whether it’s in front of thousands of fans or parents cheering from the sidelines,” Gabriel says.

Speaking specifically on the Good for Footy Community partnership, Gabriel says Toyota will also be aiming to raise a further $1 million in 2019 “to help more than 1000 local, grassroots Australian football clubs with better facilities and equipment.”

The sponsorship also includes naming rights to a host of awards, including the National Volunteer Awards, the National Inclusion Carnival, the North East Australian Football League (NEAFL) and the National Wheelchair Championships.

Previous Article
Google ads are about to get more expensive… or are they?
Next Article
Houston, we have a CX problem! How Australian companies can lead the world