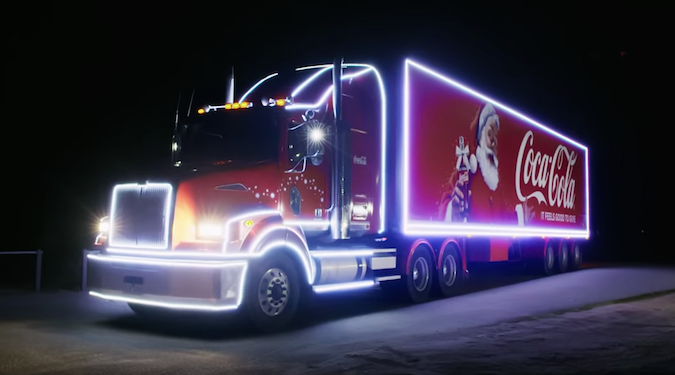 Coca-Cola Australia has released ‘It Feels Good to Give’ Christmas campaign in the second year of its partnership with Salvation Army.

Following a successful debut last year, Coca-Cola’s big red Christmas truck will once again tour around the country on a route spanning more than 10,000 kilometres, stopping at a series of cities and towns.

The global 30-second spot features a cynical young boy learning his lesson about giving during Christmas when he hands a homeless man a bottle of Coke, only to find out later that the homeless man is in fact Saint Nick himself.

To launch the campaign, Coca-Cola is hosting an event in Sydney’s Darling Harbour Tumbalong Park this evening. The event is set to transform the area into a Christmas pop-up, with ARIA award-winning Australian singer Samantha Jade performing Christmas carols aside the famous red Coca-Cola truck.

Lucie Austin, marketing director at Coca-Cola South Pacific comments, “We’re thrilled to launch our festive campaign with The Salvation Army for the second year running. It’s a campaign that spreads joy through community engagement and reminds us just how good it feels to give back.”

In addition to the truck tour, digital OOH panels will be live in Westfield centres over the holiday season and a bespoke design on the Coca-Cola Kings Cross billboard. To build awareness for its partnership with The Salvation army, Coca-Cola is also making available limited-edition Christmas packs featuring a QR code which consumers can scan to unlock more festive Coca-Cola content.

“The truck is essentially a giant mobile billboard marketing unhealthy products to vulnerable communities,” wrote Parents’ Voice campaign manager Alice Pryor in open letter expressing her disappointment in the Truck’s visit to Tamworth. The New South Wales city has high levels of overweight and obese people, with 73.9% of its adults either overweight or obese.

According to Public Health Association of Australia CEO Michael Moore, the Truck’s route in 2017 raised suspicions about Coca-Cola’s motivations, “Townsville’s kids are the heaviest in Queensland, with 21.4% overweight and 9.3% obese.