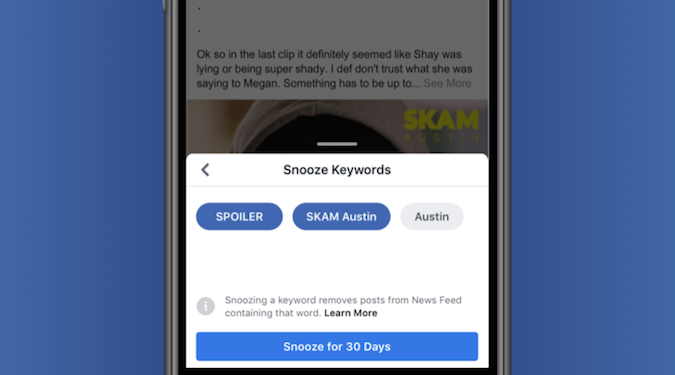 Facebook has begun testing a new feature allowing users to block content from appearing on their News Feeds based on keywords.

Haven’t seen the latest Game of Thrones? Not caught up on the World Cup? Is some of your elder relatives’ political chatter become tiresome? Facebook has a new tool for users to filter content out of their News Feeds called ‘Snooze Keywords’.

In a newsroom blogpost this week by news feed product manager at Facebook Shruthi Muraleedharan, the social media company announced the trial of a feature that hides posts from friends, pages and groups from appearing on News Feeds for 30 days based on a collection of keywords.

The feature will not be available for users to ‘snooze’ ads.

For example, if Marketing had become tired of seeing all the fun at Cannes we were missing out on, we would snooze the keywords: ‘Cannes’, ‘Young Lions’, ‘beach party’ and ‘hangover’.

In December of last year, Facebook released a similar feature allowing users to snooze people, pages and groups from appearing on News Feeds.

“Even though we work to show you the most relevant posts on News Feed, we don’t always get it right. That’s why we’ve designed features like See First, Hide, Unfollow, Snooze, and now, Keyword Snooze,” writes Muraleedharan.

Facebook has only begun testing the feature on a handful of accounts. Techcrunch reports that the feature was found in the app’s code on Sunday, prior to its announcement, by Chris Messina.

To snooze a keyword, however, a user has to first encounter it on their News Feed – potentially rendering its ‘spoiler avoidance’ appeal redundant. Techcrunch reports that a spokesperson from Facebook teased the possibility of the company “looking into adding a preemptive snooze option in the next few weeks.”

Muraleedharan continues, “We hope that with additional options to help tailor your News Feed experience, you’ll be able to spend more time focusing on the things that matter.”

Twitter user @wongmjane notes that this feature would possibly not account for the use of homograph attacks.

I can foresee the spam meme pages start to pull homograph attack soon…https://t.co/5t2CZDnsRo

Pages would be able to defeat users’ keyword blocking by replacing certain characters with imperceivable similar characters or placing invisible characters between letters.