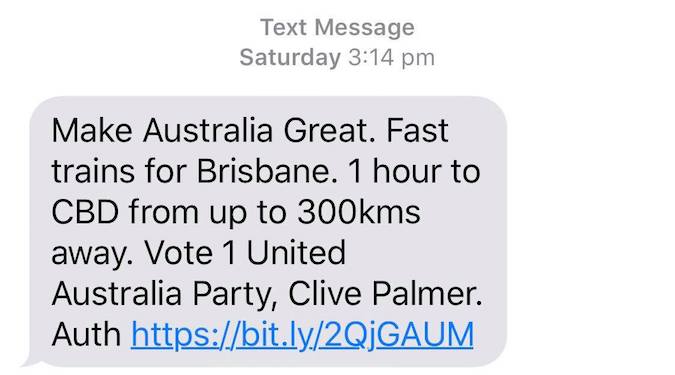 Clive Palmer has confirmed that the United Australia Party’s text messaging campaign will continue as the election nears.

Over the weekend, disgruntled Australians took to social media to issue complaints en masse regarding an ‘unsolicited’ text messaging campaign from Clive Palmer’s United Australia Party (UAP). The messages appear to have been geo-targeted, issuing promises of state-specific solutions should Palmer be elected; faster trains in Sydney, Brisbane and Melbourne; more reliable energy in South Australia and 20% less tax in Tasmania.

Clive Palmer’s text ARE illegal – not because he sent them, but because there is no opt out mechanism… #auspol

Though the UAP neither sought consent to contact mobile phone users nor offered the option opt out, the campaign has not broken any laws, as the messages are not attempting to sell goods or services, according to Australia’s Electoral Act.

“The texts sent to residents were fully compliant under legislation approved by the Liberal and Labor governments,” a party spokesperson told Nine news.

The link attached to the message is compressed using URL tracking service Bitly. According to metrics sourced through the service, the link has received 222,420 clicks since Thursday 10 January. The link has also been flagged as potentially “malicious or spam content” by the tracking service.

Why is Clive Palmer sending me suspicious links and how did he get my number #auspol pic.twitter.com/EhRKnvDWca

Despite a tsunami of online outrage and with more than 3000 complaints filed against the party, Palmer defended the messaging campaign in an interview with ABC, blaming the majority of the complaints on “robo calls” directed by the trade union movement, “We’ll be running text messages as we get closer to the election because it’s a way of stimulating debate in our democracy,” he said.

According to Palmer, roughly 5.6 million individuals have received the text message thus far, though he doesn’t know personally how the numbers were obtained, “We don’t have the list of course,” he told the ABC. “Distribution lists are generally available through nearly any advertising agency in Sydney.”

Some on the internet have taken to harassing Palmer and his colleagues in return directly, his personal mobile phone number being revealed through an old press release.

Do you need to reply to an unsolicited text message from Clive Palmer?
He has published his phone number for you to contact him. pic.twitter.com/XqGfomRPVb

Today, Palmer and the UAP have also published a mobile game, the user plays as Palmer in a Mario-style platformer, avoiding obstacles to obtain floating Tim Tams and defeating enemies such as Richard Di Natale, Bill Shorten and Prime Minister Scott Morrison. The game was reportedly funded in part by the party’s campaign fund.